by George Mitton
published: 6 May 2017 in Live Music Reviews
Tweet 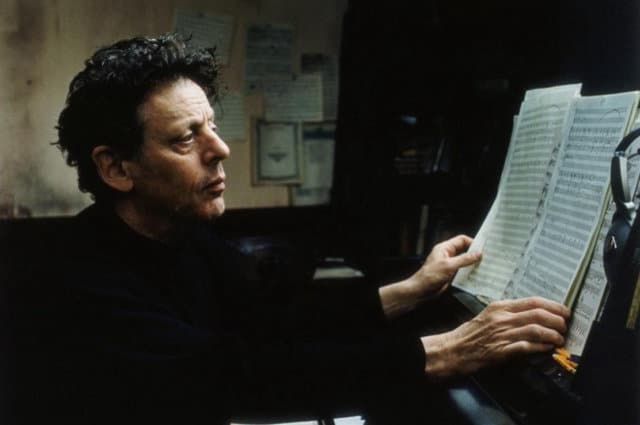 At early performances of Philip Glass‘s Music in Twelve Parts, held in Manhattan lofts in the 1970s, the audience could wander around or lie on their backs. Sadly, the Barbican’s concert hall is less conducive to such a bohemian experience. Listeners who fall into a trance-like state must do so in their seats.

The chance of descending into a reverie is real, however. Inspired by Indian classical music, this minimalist masterpiece calls to mind words such as hypnotic, mesmerising and transporting. Composed of countless repeated phrases that develop in multiple layers, the music gives the listener an experience similar to watching an organism grow under a time-lapse camera. It is a rich and rewarding work, monumental yet accessible.

It is also rather long at about four hours. The Barbican has taken account of the length by including three intervals, the middle one lasting an hour. At first glance, the breaks appear to be for the audience’s sake, but really they are as much for the musicians’ benefit as anyone’s, because this is a challenging piece to play. For the four keyboardists, Glass’s arpeggios strain and tire the fingers with their endless repetitions. The singer, soprano Josephine Stephenson, is called to emit breath after breath of staccato bursts. By part 10, flautist Maaike van der Linde is shaking her wrists in understandable discomfort whenever the score permits her a moment’s rest.

The musicians’ eyes, however, must not waver from their notes, for the piece is deceptively complex. Keyboardist James McVinnie, effectively leading the ensemble, is charged with conducting the group by bows of the head to signal when the next section begins. The concentration has to be acute because, for all that the music appears to ebb and flow, it depends on a rigid, rhythmic underpinning with occasional shifts in tone that can be abrupt.

Broadly speaking, the musicians do an excellent job, which must be a relief because tonight’s event is something of a one-off. Composed in instalments between 1971 and 1974, Music in Twelve Parts has, to date, only been performed by the Philip Glass Ensemble. Although they don’t have a name as such, McVinnie’s group of “close musical colleagues who are all in some way associated with Glass’s music” has been granted a rare honour, which, as McVinnie remarks in the concert notes, comes in the composer’s 80th year.

Drawn by the novelty of the performance, aficionados of Glass’s music almost fill the Barbican’s concert hall. It is a turn-out that underlines how far the composer’s appeal stretches beyond the esoteric confines of modern classical music. As well as featuring in numerous films and commercials, Glass’s oeuvre is seen as a major influence on electronic producers and has been sampled by artists as diverse as J Dilla and Ricardo Villalobos.

Tonight’s performance is a reminder that Music in Twelve Parts is the quintessential Glass composition. Although its cleverness doubtless rewards close listening, it also has the interesting quality of being accessible, if you like, almost from any angle. Should the mind wander, it takes no effort to return.

The ensemble at the Barbican deserve praise for a fine performance of this intricate and challenging work. There is no crucial development to miss, no motif that must be recognised ahead of its reappearance later on. Music in Twelve Parts is a sort of musical depiction of the ever-unfolding present, a constant transition from one state of being to another in which it is impossible to pinpoint the moment when A becomes B.