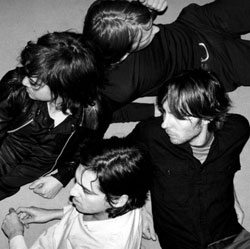 When those unmistakable opening chords of Lisztomania rang out around the Roundhouse there was still a large white sheet obscuring the stage. Lit from behind, Phoenix’s first appearance was as huge silhouettes. A shadowy double image of a drummer beat out the rhythm above four hip-swiveling profiles.

Half a minute later, the sheet was released from the rafters and it billowed down to reveal Thomas Hedlund keeping time behind Laurent Brancowitz, Thomas Mars, Deck D’Arcy and Christian Mazzalai. As stage effects go it’s a simple opening artifice, but it sets the tone for a night of impeccably elegant showmanship.

Phoenix deliver everything you could want from an indie rock band in 2010. They are unutterably cool, in that way few bands have been since The Strokes first slouched into the public consciousness a decade ago. However unlike The Strokes, they’re still fresh, still full of ideas and still playing with such joie de vivre that it’s easy to forget that their debut album actually predates Is This It.

The comparisons with The Strokes in their heyday don’t end with their insouciant onstage lan. Phoenix are also scrupulously adroit musicians, and their insistent riffs have the same ability to make pretty girls shake their hips as Last Nite has had in a hundred thousand indie discos. After their opening salvo the only criticism that could possibly levelled at them was that their songs were performed too flawlessly, almost too note-perfect to feel alive.

Even that quibble melted away as the night went on and the band skilfully deconstructed their music with a Gallic shrug. In a particularly curious sequence between Parts I and II of Love Like A Sunset, the rest of the band fell silent as brothers Mazzalai and Brancowitz tossed an individual note between each other. Their gradually reconstituted sound was all the more impressive for having been so meticulously dismantled.

The majority of the set was drawn from Wolfgang Amadeus Phoenix and its ambience seeped into their older material. Too Young, from their debut, United, was a reminder that their panache is nothing new while they reworked tracks like Run, Run, Run, from Alphabetic, to fit their sound du jour.

It would be remiss not to mention the light show. Brancowitz used to play in a band called Darlin’ with Thomas Bangalter and Guy-Manuel de Homem-Christo, now better known as Daft Punk. While Phoenix’s live show may be more understated than the robot-manned pyramid their fellow Frenchmen habitually occupy, tonight showed that it’s possible for a band to compliment themselves with visuals as well as beats lifted from dance music.

The set was concise, drawing itself to a close within an hour and a quarter, but it was perfectly formed and the crowd’s only complaint was the sweltering heat they found themselves enduring in the tightly packed venue. 1901 was the show’s dnouement, revamped into a sprawling epic during which Thomas Mars crowd surfed to the back of the hall where he finished the song. Just like Mars, Phoenix deserve to be carried aloft on a wave of public appreciation. They have the songs and the performance, but there’s also something else ineffable, a certain je ne sais quoi, that will see them endure.