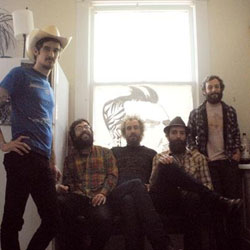 Unusually for a support slot, the bar at the Scala is empty and there’s a large, devoted crowd clustering around the stage. This is because this Phosphorescent gig kicked off with a surprise bonus set from the outstanding singer-songwriter Caitlin Rose.

Much has already been written about Rose elsewhere (including on this site) but it’s worth emphasising how much she has developed in talent and artistry since the release of her Dead Flowers mini album. Her diminutive, hunched stature belies a voice of considerable strength and impact, and her songs (especially Shanghai Cigarettes and Sinful Wishing Well) naturally inhabit the vernacular and style of Nashville country (“three chords and the truth,” as Harlan Howard put it) whilst retaining Rose’s own glowing personality and dry humour. Tonight she claims to be unwell, but there’s little sign of it in this short but utterly convincing performance. Her unconventional ensemble lack a drummer, but still sound rhythmically driven and committed. Her young guitarist even pulls off some gentle licks straight out of the Mark Knopfler textbook.

Second support act Timber Timbre are less concerned with faithful authenticity. This is an unusual, murky sound that takes elements of the blues and refracts them through opaque glass. The results occasionally resemble the doom-laden avant-rock of Godspeed You! Black Emperor or the bleaker, less humorous side of Nick Cave And The Bad Seeds, particularly thanks to Mika Posen’s insistent, scratchy and unsettling violin. It’s initially a potent, disturbing combination, but after a while the earthier, more familiar elements seem to take over. There’s some twangy guitar possibly drawn from Ennio Morriconesoundtracks, and a ceaselessly thumping bass drum pulse that sometimes threatens to overpower the music rather than anchor it.

During the first three songs of Phosphorescent’s headline set, the star of the show is a bloke in the audience. “Turn the bass drum down and turn the guitar up,” he shouts in a broad northern accent. “You’re awesome – but it’s really muddy!” He’s got a point – this has to be some of the worst sound at a gig in recent memory. It’s partially a balance and engineering issue – the drums are far too loud and everything else is fuzzy but some of the blame seems to reside with the band too, playing with such relentless assertion that some of the subtleties of Matthew Houck’s fine songs are lost. The southern soul of It’s Hard To Be Humble (When You’re From Alabama) is rendered as heavy pub rock, whilst the delicate bass drum heart of Nothing Was Stolen (Love Me Foolishly) becomes a relentless pounding that overpowers the delightful vocal harmonies. Houck looks visibly lost and his vocals, vulnerable and faltering at best, are uncertain and uncomfortable.

Luckily, things get sorted out in time for The Mermade Parade, a striking and beautiful song that retains the vivid power of its recording in live performance. Houck at last looks engaged and we can finally hear Jesse Anderson Ainslie’s exciting, tumbling guitar lines. Some of Houck’s earlier solo material is reimagined in thrilling, cascading full band versions (Wolves and the wry humour of Joe Tex, These Taming Blues especially). Perhaps wisely, the group don’t attempt to replicate the dazzling choral wonder of Hej, Me I’m Light, instead offering some straightforward but honest readings of a couple of Willie Nelson songs.

There’s always a lingering sense though that some of Houck’s songwriting intricacies are being buried beneath a musical assault that lacks finesse. Houck’s solo set, during which he delivers a beautiful version of Leonard Cohen‘s Hey, That’s No Way To Say Goodbye, is a welcome delicate reprieve for the audience’s ears. The whole band return for what seems like an inevitable trudge through the new album’s epic closer Los Angeles – stormy, long, loud and, ultimately, perhaps a little empty.