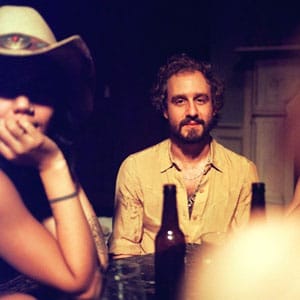 Whether it be sunset at a festival, a sticky floored basement or a triumphant stadium show, the right venue can elevate and define a gig. Few places hold such evocative power as St Pancras Old Church. As Matthew Houck, aka Phosphorescent, appears flanked by memorials to long dead priests and the scent of incense, the atmosphere feels appropriately reverential and the stage is set for an evening of reflective soul-searching.

Matthew Houck has been creating intelligent, lyrical folk music for over a decade. Appearing first as Fillup Shack, he has been performing under the name of Phosphorescent since 2003’s A Hundred Times or More release. All of the subsequent four albums have contained wistful folk songs from the deep south of America. Whilst similar artists like Sparklehorse and Iron And Wine have achieved greater commercial success, Houck has long been adored by critics and has developed something of a cult status.

Billed as a unique and intimate show, tonight’s gig showcases upcoming album Muchacho, which – judging from opening number Muchacho’s Song – will not disappoint Houck’s loyal fanbase. Finely wrought and delicate, the stripped back guitar and piano arrangement perfectly suits this venue. The set continues with songs evenly distributed from his entire catalogue and the audience quietly but appreciatively soaks up his particular brand of gently insistent folk.

On record, strings supplement many of the songs, providing a more urgent and upbeat element. However, thanks to tonight’s guitar, piano and vocal trio, the lyrics are far more prominent and Houck’s ability to paint images of rural loneliness takes on a vividly fragile hue. Wolves, a stand out track from 2007’s Pride is a perfect example. “Mama there’s wolves in the house. Mama they won’t let me out,” he sings. Again and again, Houck’s Americana is a place of fear and unease and, when combined with his light and cracked voice, creates a deeply affecting picture of a man searching for release and safety through the collective experience of music. At times Houck falls to a whisper and the audience visibly lean forward to listen, eager not to a miss a word. It’s a powerful display from an artist skilfully adept at immersing his listeners into his own world.

Recent single Song For Zula is a highlight of the set. Hopeful and passionate, it suggests great promise for the next album. However, at times the delicacy and introspection can feel relentless. The lyrical dexterity can become a little meandering, grinding down in places almost to a halt. Houck’s commitment to folk and country did, after all, lead to a Willie Nelson covers album, and he can display that genre’s ability to seemingly sacrifice melody and radio friendly catchiness for earnest storytelling. Nevertheless, such integrity must be commended and the craftsmanship of these subtle songs makes the experience ultimately rewarding.

By the time the slide guitar comes to an end on epic closer Los Angeles, Houck has succeeded in creating a little corner of Alabama in London. As the audience steps out into the night, there is an odd sense of fulfilment. At its worst, Phosphorescent borders on the soporific but, at their best, the yearning guitar and lyrics imbued with all the weight of the world create a world of trial and catharsis worthy of such a dramatic venue.