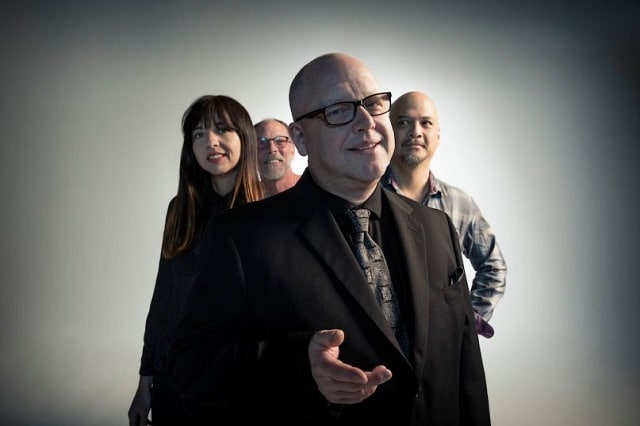 When Pixies re-formed in 2004, delight was mixed with concern that their legendary status would be tarnished. After all, the seminal Boston alt-rockers who’d had such a big influence on grunge had been apart for over a decade since their acrimonious split. Thankfully their live performances showed the band had retained their raw power.

After the departure of bassist Kim Deal in 2013 and the release of two disappointing albums, it seemed the creative spark had gone. But their recent album Beneath the Eyrie is a real return to form, and the band has now started a world tour proving they are still a force to be reckoned with.

Not surprisingly, Pixies get a rapturous response when they hit the Alexandra Palace stage. They start with an extended instrumental build-up to Gouge Away as front man Black Francis asks the ten thousand strong crowd if they can hear each one of the band in turn – the roar back signals we can loud and clear.

Thereafter he lets the songs do the talking as the quartet hurtle from one pulsating track to another with barely pause for breath in between. There’s no denying the passion shown in their marathon two-hour performance, though it does become a bit relentless at times – like a juggernaut on an unstoppable course. The cavernous Ally Pally is not the easiest space to perform in, and a bit more interaction would have engaged the audience more.

The 38-song set features tracks from all the band’s albums apart from their first comeback Indie Cindy, including all 12 from Beneath the Eyrie. So, because of the way they pack them in, the tour is both a promotion for the new material and a retrospective.

The new songs stand up pretty well on the whole. Recent lead single On Graveyard Hill makes a particular impact with its threatening gothic atmosphere, as Francis bellows like he’s possessed by demons. Catfish Kate turns dark folklore into a mythic struggle, while the eerie Los Surfers Muertos re-visits Pixies’ surfing roots and In the Arms of Mrs. Mark of Cain rumbles along ominously.

But of course it is the classics from yesteryear – especially from Pixies’ first two albums Surfer Rosa and Doolittle – that tend to get the crowd most involved. Caribou has people howling along like wolves, and Bone Machine prompts a mass chorus sing-along. The primal noise of Debaser provokes frenzied dancing, and Wave of Mutilation surges irresistibly through the massive hall. Where Is My Mind? sends everyone manic for several minutes, while Monkey Gone to Heaven hits joyous heights.

Unusually – and a sign of a great live band of course – Pixies are varying the set content and order from night to night, taking their cue from Francis at each venue. This time the band dispense with an encore – presumably because they run out of time by the curfew.

Joey Santiago’s distinctive shredding guitar cuts through the space like a lethal weapon, and for a party trick he actually plays one solo with his cap. David Lovering’s powerhouse drumming combines well with the surging bass of ‘new girl’ Paz Lenchantin, who also contributes nice vocal harmonies. As the focal point, Francis’s bullish figure is instantly recognisable in all-black, growling one moment, rhapsodising the next, embodying the melodic menace that has made Pixies so special.