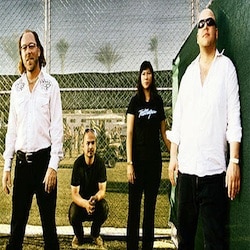 So what to do when you’re one of the most influential bands of modern times, and the sheer visceral excitement generated by your reunion has slightly palled? Back in 2004, the mere fact that Black Francis, Kim Deal, Joey Santiago and David Lovering were back together was enough to have entire generations of both past and present indie kids slavering with excitement.

Since their reunion, the foursome have resisted the temptation to record a new studio album, instead concentrating on touring – sometimes performing the entire Doolittle album live or, like tonight’s set at the Troxy, performing a setlist made up entirely of fan requests, garnered by emails a few weeks before the gig.

Of course, when it comes to the Pixies, a setlist doesn’t really matter so much. This is the band who, with just five albums, redefined modern guitar music for a new generation. Without Pixies – no Nirvana, no Radiohead…and without those two bands… well, you get the picture.

They may look a tad different these days – David Lovering has the air of the coolest geography teacher in the world, while the permanently grinning Kim Deal could pass for Winona Ryder’s mum with her rather elfin haircut – but as soon as the muscular surf guitar chords of Cecilia Ann kick in it’s clear that none of that famous chemistry has been lost.

As the steam rises from the ever more frantic moshpit, it’s clear that the setlist really is a fan’s wet dream. Twenty-nine songs, taking in the best moments of all five albums, are raced through with increasing intensity, Black Francis proving he’s still got the most gut-busting scream in town. The chorus of Tame still has the power to send goosebumps down the spine while old favourites like Debaser and Monkey Gone To Heaven have the entire Troxy bouncing in unison.

Audience banter is kept to a strict minimun, with just Deal speaking to the crowd and thanking everyone for coming. Yet it’s obvious that this is a band who have put their past differences behind them and now seem rather at ease with each other. Even the odd mis-step, such as a dud note in Rock Music, or a messed-up introduction to Where Is My Mind, are greeted with laughter and wide smiles from Francis and Kim.

Highlights are numerous, but it’s worth mentioning that the material from Trompe Le Monde, now seen as the band’s weakest album, sounds absolutely magnificent even next to the more recognised classics. Planet Of Sound, U-Mass and The Sad Punk have an intensity and power that could tear your face off, while the cover of Head On still sounds even better than The Jesus & Mary Chain original.

By the time the closing strains of Here Comes Your Man had died down, it was impossible to see anyone without a mile-long grin plastered on their face. They’re one of those bands that defined a generation, and it’s difficult not to feel grateful that they’re back amongst us.