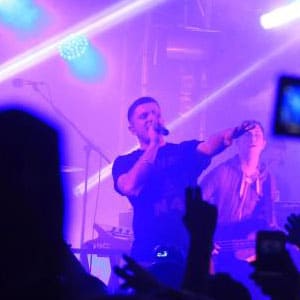 There’s something of the swaggering boxer about Ben Drew. Dressed as though he’s just arrived after a knockabout with a punch bag, he saunters animal-like on to the stage of the Great Suffolk Street Warehouse car park, a whitewashed under-the-arches cavern rigged up with the best sound, lighting and visuals systems a major label deal and a YouTube streaming tie-in can buy. He glowers. He dominates the centre of the stage. He is angry and he has things to say.

Plan B is here in this unusual space to launch his own soundtrack to his directorial debut, the gritty, urban movie Ill Manors. Between tracks from the album, projected film clips of beatings, stabbings and all manner of other feral unpleasantness play out on the walls, in lieu of much in the way of audience interaction from Drew himself, who seems keen on creating an all-encompassing, immersive experience. The main set is taken entirely from the new album; and it’s material that decidedly brings Drew back to his tough-guy rap roots. We’d last seen him on stage in his retro soul singer days at the Roundhouse, being cuddled by Elton John; the setting here couldn’t be further removed. Successful major label artists – and Drew is one, after his last album The Defamation Of Strickland Banks sold over a million copies – usually struggle when they go for ‘edgy’; this gig comes close to feeling like it is.

For the most part, the production pulverises without feeling forced. The sound system is amongst the loudest these ears have heard – on a par with Corsica Studios, down the road at Elephant & Castle – and Drew’s band of drums, guitars and synths take full advantage, especially on the title track Ill Manors and Playing With Fire, which aren’t far removed from sonic assaults. Clattering rhythms and buzzsaw guitars compete to fill every space not taken up by Drew alternating between powerful howling and angry, spitty rapping. Labrinth and Kano join him to rap, and there’s the curiosity of the unmistakably stick-thin, beehived form of punk poet John Cooper Clarke, performing the poem Pity The Plight Of Young Fellows, as he does in the film. By the time Chase & Status pop up to collaborate on End Credits, it’s a full stage brimming with tangible intent, and the atmosphere is rowdy; Drew and Kano shoulderbarge into each other at one point.

The senses-slaying combination of the ramped-up volume, muscular arrangements that take full advantage and strobe lights that give the impression of energy exploding from the stage make this an incendiary comeback performance from a man who can, it seems, rap, croon, direct films and, crucially, demand attention as a front man. Vocal lines are occasionally lost in the sonic rage that powers this set, and Drew’s prevailing lyrical concerns of drug dealers, pimps and destitution are not likely to be to everyone’s taste, it is true. But whatever you thought you knew about Plan B, here is a man with considerable capacity to surprise.

Plan B MP3s or CDs

Plan B on Spotify