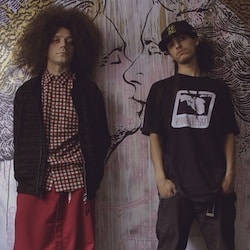 Polar Bear are no strangers to the London Jazz Festival, for Seb Rochford’s quintet have always appealed to jazz sceptics whose tastes dwell at the smarter end of rock or electronica. This year the band are hidden away in the Westminster Reference Library behind Leicester Square, lending the event an atmosphere at once bookish and playfully rebellious. Factor in the trestle table bearing free rum punch, the audience cross-legged on the floor, and Rochford’s Aberdonian-flecked mumble as he introduces the set, and it is all rather adorable.

Live, the band approach them with painterly attention to colour, Leafcutter John even playing guitar with a paintbrush on opener The Love Didn’t Go Anywhere. A standout track on 2010’s Peepers album, it features a solo from Wareham that is characteristically direct and clich-free, and is followed by the brisk ska swagger of Bap Bap Bap.

Rochford’s drumming and inter-song patter make for quite a contrast. “This is a happy tune,” he proffers less than illuminatingly to ribbing from the crowd, before storming into Happy For You, driving along its country-dance 6/8 with kaleidoscopic inventiveness. Not for Rochford the wild physicality of your archetypal rock drummer; his face remains a mask of focus, with the occasional glance towards Herbert or Leafcutter.

The latter’s arsenal of effects is a defining element of Polar Bear’s sound. Early in the set, during the extended open section of Tomlovesalicelovestom, he inflates a balloon, then uses its high-pitched whine as it deflates to duel with Lockheart’s sax. Fluffy (I Want You) centres on his glitchy interplay with Rochford as he turns a Nintendo controller into a chaos pad. Leafcutter’s guitar playing, though uncomplicated, shows the same mastery of texture. On Appears, Moves and Sails he makes it creak like a ghost ship; on Peepers, the last tune of the first set, it has a Television-like attitude.

The second set features the night’s unique selling point, Jyager. The MC recently released the mini-album Common Ground with the band, featuring his rhymes over cut-up samples from the Peepers sessions. This collage approach comes across as cerebral on record, but Jyager makes it clear he wants the set to be a “party”, summoning the crowd to their feet. Jyager and the band rattle through their six collaborations tracks, with Never Giving Up slowing to a dirty trip-hop groove to segue into The Role I Choose.

This year’s London Jazz Festival includes several hip-hop hybrids in Soweto Kinch, Robert Glasper and Talking Sages. In the case of Polar Bear and Jyager the marriage feels as natural live as on record, though the instrumentalists operate as a backing band rather than sharing the frontline, this being Jyager’s show. As a vocal presence he is nothing remarkable, mind, and on Enterprize his rhymes get lost in the mix, despite his standing as a gifted wordsmith.

On Don’t Think I Won’t, assonances tumble over one another to add a layer of hazy menace to an evergreen subject, mankind’s efforts to chill in the club. The encore provides the set’s most “jazz” moment, Jyager’s rhymes accompanied by an apparently unrehearsed jam that is about to end before Herbert pushes it, with a grin and a shrug, into a cheeky epilogue.

“Make some noise!” Jyager shouts before the encore. It’s the most commonplace rabble-rousing cry imaginable, but to have it yelled – and obeyed – in a jazz gig, in a library? Forget the concert halls: the spirit of the Festival is here.