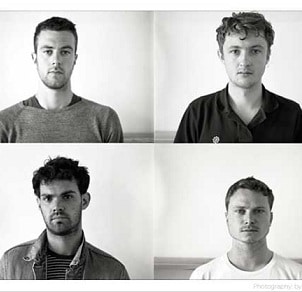 It’s October. It’s cold. The natives of Camden are weighing up the options: take advantage of the views from an amazing proliferation of open rooftop bars or stay inside. Halfway along Chalk Farm Road, something is very right in the music world. Portico Quartet have filled out Camden’s Roundhouse.

Autumnal temperatures not withstanding (there’s a distinct lack of heating), the venue’s high ceilings and sparse brickwork make it a fabulous space to saturate with post-jazz experimentation that’s evolving carefully into something more. Perhaps the band felt the need to give something back after their 2008 Mercury Prize nomination for debut album Knee-Deep in the North Sea but were already too far along the road to their second, leaving it until their eponymous third album to – dare we say it – turn more (gulp) accessible. The third album is nearly a year old now, and the new direction has clearly paid off.

Swedish singer Cornelia Dahlgren adds vocals to the Quartet for the first time to recreate their jointly-penned album track Sleepless; they’ve never included lyrics before, but an enthusiastic reception from the crowd suggests they’d do well to repeat the gamble. There’s also a nice irony in realising that Cornelia, who dropped out of her home country’s version of Pop Idol because it was “too manufactured” is helping to steer Portico Quartet down this new, more commercial-sounding path. It’s a good thing, then, that they add Dawn Patrol from second album Isla into the mix, letting it act as a reminder that they’re not moving too far from their roots. The new music sits nicely alongside the old. Glacial soundscapes, soprano saxophone and sparse drums remain the order of the day, and the steel percussion Hang still sits at the centre of their sound, now played by Keir Vine rather than Nick Mulvey.

Beneath a cavernous roof, filled with cold green laser beams that play out over a large and appreciative crowd, this journey into the evolution of their sound is a long road to have travelled from their days of busking on London’s South Bank. They’ve succeeded in taking it while still preserving what made them great, a combination that works very well indeed.