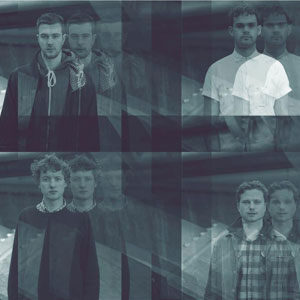 Over the years Portico Quartet seem to have unintentionally and slightly unfairly become known primarily for being “that band that use the hang” whilst also being viewed by some as representative of the kind of act that receives the token jazz nomination at awards events like the Mercury Music Prize.

Both viewpoints do them something of a disservice. Although they use elements of the vocabulary of jazz, it has never really seemed an accurate tag, their sound occupying something of a posterior, separate position. The release of their third, eponymous album should help dispel many of these opinions. The departure of original member (and hang player) Nick Mulvey from the band last year to pursue his solo project, and his replacement by Kier Vine, seems to have pushed them in a different direction, resulting in a greater emphasis on electronics, and in particular texture-augmenting electronics. Jack Wyllie’s sax is used more sparingly also, a fact borne out by him spending significant amounts of time during tonight’s show at York Hall behind keyboards.

The band recently talked about how they wanted to change the type of venue in which they play live shows, moving away from seated venues towards standing venues that would be suit their new sound better and offer more in terms of audience engagement. It was a brave move in some ways, especially since parts of their new self-titled album work better when listened to on headphones.

They open tonight with the dense, gaseous electronic haze of Window Seat, before easing into Ruins which is centred around Wyllie’s fluid saxophone lines. It also shows they have retained their sense of melody – the sax building patiently before bursting through the clouds in bold style. During the mid-section of Spinner a wave of dark electronic noise overwhelms all other aspects of their sound. As an opening trio (both on the album and live tonight) they give a succinct overview of where Portico Quartet are heading musically, with the use of beats in particular noticeably revitalising their sound. Proof of their change of direction comes later in the set with Rubidium, as bubbling electronic pulses battle with loose, freeform percussion before both gradually fizzle away. It demonstrates that the relegation of the instrument that helped define their early sound has arguably made them a more interesting musical proposition.

The rest of the night sees them concentrate predominantly on more selections from the new album but they do make space for three tracks from second album Isla. Of these, Clipper builds to an impressive head of steam, its melodic exuberance still intact whilst Dawn Patrol is played as an encore, saxophone and percussion duelling in powerful, combative style. To the disappointment of some they opt not to play anything from their debut album, very much sending out a message that they have moved on as a band.

They close the main set with Steepless, with singer Cornelia Dahlgren returning to the stage to contribute vocals after her earlier support slot. It may be an appropriate way to close the gig, but does markedly stand apart musically from the rest of the new material, the combination of the female vocal and clean beats coming closer to recalling trip-hop acts like Lamb.

Despite the new material-heavy set, on the whole they carry the crowd with them although during the quieter moments the hum of audience chatter occasionally surfaces. Yet, this has no overriding negative impact on the show and can’t detract from the view that these are exciting times for Portico Quartet. Tonight they sold out the 1,100 capacity York Hall, with a bigger date at the Roundhouse to follow in October. Not bad going for a band that once passed time by busking on London’s Southbank.