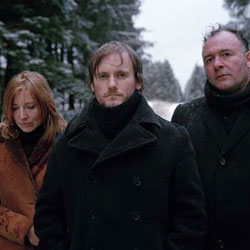 When a band vanishes for a decade, it usually heralds their end.

Portishead reportedly suffered writers’ block as they struggled with their third album, their first studio recording since their eponymous 1997 release. They struggled with titles too, ultimately settling on the self-evident Third.

And so, for their first British tour this millennium, Geoff Barrow, Beth Gibbons and Adrian Utley had new material to showcase.

For many in their audience, this would also be a first chance to hear classic tracks from the Bristol band’s first two records, the Mercury-nominated debut Dummy and its follow-up, Portishead. On a stage backed by three square projection screens, Portishead would afford their audience a mix of both old and new.

With three helpers, the band appeared all dressed in serious-muso black. Gibbons, fragile and waif-like in centre stage, turned her back on the audience whenever she wasn’t singing, one hand clutching nervously at her microphone all the while. Barrow, ruggedly blond like some recent import from a Californian surf school, held cans to an ear with one hand, DJ style, while scratching records with the other. Utley sparked off the additional keyboard player, teasing a full range of sounds from his guitar.

The rollicking Silence, the new record’s opening number, started the set in a mood at once thrilling and apprehensive. But by its end it was clear Barrow was having problems with one of his decks. The offending gadget was removed after Mysterons, as Gibbons suggested the audience disappear for “a free drink on us” and Utley, slightly more credibly, uttered, “we have to leave the stage for five minutes as we really have to fix this”. These famously perfectionist musicians have said that something goes wrong in their live show nine times out of 10, but while leaving the stage after three songs and handing over to a DJ could have wrecked the show, they returned with stunning new track The Rip and it was as though they’d never left.

Marking an unusually folky direction, The Rip’s big hook is a single note sung by Gibbons that is sustained while the rest of the track builds. Also new was the unsettling Magic Doors and Third’s lead single Machine Gun, both of which trade scratchy decks for real drums.

Each of the oldies’ first bars were greeted with whoops and applause, sparks of recognition for songs that resonated emotionally with their listeners over a decade ago, Glory Box and Mysterons in particular. They’ve lasted the test of time.

Throughout, the lighting seemed to be loosely coordinated according to which album’s song was being played. Dummy was lit in royal blue, Portishead characterised by straw lights and black and white visuals, and Third highlighted in teal. Attention to detail like this can make a good show a great one, and thus it proved here.

Individual feats of musical skill were applauded – a Gibbons vocal line, Barrow freestyle scratching his decks, Utley’s virtuoso guitar parts. But the main set’s loudest applause was saved for a beautifully stripped-down rendering of Wandering Star. The additional musicians left the stage and Barrow, Gibbons and Utley congregated in a semi-circle, as though at a campfire. Barrow had exchanged his dex’n’FX for a bass and Gibbons, at the line “always doubled up inside”, was seen to double up.

This was a set that could be defined by the quality of material left out, with both All Mine and Undenied from the second album kept under wraps. In truth they weren’t needed. Portishead had already shown that their music, far from defining yuppie dinner parties a decade ago, remains amongst this country’s most original. As the main set led into the encore and the classic Cowboys gave way to new track Threads, everything fitted – the memories of 14 years ago, the excitement at Portishead’s new material, the visual spectacle.

On the Live From Roseland, NYC album, Roads’ final moments are disrupted by the crowd cheering and clapping before the final notes. It proved the same tonight, the audience seemingly unaware of when the song ends, or perhaps unable to contain themselves. By this point, neither could Gibbons as she unexpectedly leapt into the front row of the audience, hugging and shaking hands with fans.