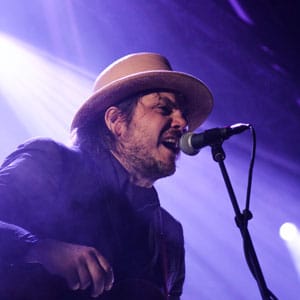 Barcelona’s Parc del Frum is a huge concrete expanse that hugs the Mediterranean. Six main stages named after corporate brands have been splayed out here in a massive crescent moon shape to show off the sea, modern architecture, and the beautiful skyline of Spain’s second largest city. This year’s Primavera offered a wide variety of bands – heavy rock and punk, electronic, soft pop, dance pop, hip-hop, and whatever it is that Sleigh Bells do.

One major theme of the festival, explicitly planned or not, was hits from decades past. Grunge veterans Mudhoney, noise rockers Yo La Tengo, and pop darlings Saint Etienne and The Cure have been playing for, roughly, forever. (The Melvins would’ve been included in this oldtimers list if they hadn’t cancelled at the last moment.) Other groups are reunited – The Afghan Whigs, Refused, Archers of Loaf, and a star-studded tribute band to Big Star‘s third album, Third/Sister Lovers.

Since we could not (unfortunately) be in six places at once, what follows is an assortment of Primavera 2012’s highlights. There were likely others.

In an early spot on the main stage, The Afghan Whigs struck hard with a three-guitar assault. Drummer Cully Symington was all about big movements with cymbals flailing as a multi-instrumentalist band member moved from violin to cello to keys and auxiliary instruments. Meanwhile front man Greg Dulli projected strength and confidence as he spilled out lines like “I’m really slobbering now” (from Fountain And Fairfax). A formidable presence onstage, the Whigs were a great launching point for the long weekend.

The Pitchfork stage was host to Canadian electronic musician Grimes. Heading from the main stage through a large architectural marvel (which looked like one half of the roof of an enormous concrete house) that served no immediately apparent practical purpose, one descends a massive set of steps and rounds a corner to see a bubbly girl onstage singing her heart out to very fast, very danceable sample-based beats as a small crew of boys and girls dance around her in a carefree fashion whilst swinging large flags, pieces of clothing, and other accoutrements. The music, like the performance, was effervescent – sped-up vocal samples met poppy electric beats in a Dntel/Postal Service-type fashion.

The only two things to be heard when a festival stage’s sound cuts out for an entire verse of a song is a light whisper of cymbals as the band plods on, and a collective groan from the hundreds-strong audience. The MINI stage, so named after the automobile (one of which sat enshrined and lit from below literally up on a pedestal to the side of the stage) had the best view and yet most removed location of any festival stage (being located at the tail end of the Fòrum near the tip of a very large lot, right on the water, and with Barcelona’s skyline of large, beautiful buildings as its backdrop). Seattle’s Death Cab For Cutie filled the stage surprisingly well. They delivered a strong, stadium-sized performance from what one would expect would be a large-club-sized band, at best. Songs like The New Year exploded with energy and had the audience enraptured.

Transitioning from Seattle’s Death Cab For Cutie to Seattle’s Mudhoney is much like eating a fancy sushi appetizer followed by the bloodiest t-bone steak ever as the main course. The ATP stage has a wide front expanse abutted by one high wall of concrete stadium-style rows of seats, and all visible space was occupied by festival goers. Mudhoney, the group that Nirvana‘s Kurt Cobain worshipped, are still grinding out excruciatingly loud grunge, punk, and noise with as much relevance and urgency as they did in the late ’80s when they started. Front man Mark Arm, who reportedly coined the term ‘grunge’, showed no signs of slowing down as he screamed and thrust his way across the stage.

Back at the main stage in the premium 11pm timeslot, Chicago’s finest performed a tightly packed hour of hits to a sizable audience. Since the festival ran daily from 4pm to 4am, the 11pm main stage slot signified what must have been for many concert goers the pleasant upswing of a good booze- or drug-buzzed romp before they got a little too hungry, thirsty, dirty or tired and passed out on the pavement halfway to the MINI stage. Lead man Jeff Tweedy, dressed in a plaid blazer and a porkpie hat, masterfully performed his mix of sorrowful, poignant tunes in front of a band well-equipped to play anything from Americana Woody Guthrie folk to Big Star pop rock to Emerson, Lake & Palmer prog rock at the drop of a (porkpie) hat. Nels Cline once again stole the show with his laboured guitar solos that catapulted the band into the hallowed upper echelons of rock.

Down at the ends of the Earth again at the MINI stage, The xx trudged through their delicate, haunting tunes with all the enthusiasm of a toll booth collector. Dressed in all black and standing stock-still behind their guitar, bass, and large drum machine table, the group pulled off a disaffected, gothic kind of pretension, sort of like the Dresden Dolls without the whole fun, enthusiastic, carnival element. The mix sounded nice and the use of triggered drum samples (instead of playing to a set recorded track) was interesting, but the key element needed for any public performance, energy, was unfortunately left out of the mix.

The Glaswegian quartet partially responsible for catapulting the indie rock movement into the mainstream in the ’00s (and so for whom we can blame for Fall Out Boy and their ilk) with their deliciously decadent 2004 eponymous opus have a flair for performance. Onstage, guitarist Nick McCarthy is deadly precise on his riffs, drummer Paul Thomson is relentless in his disco beats, and Alex Kapranos has all the killer suavity of James Bond mixed with Frank Sinatra. Franz were the last big performance of the night and started out with a great intensity on their old hits. But after a handful of songs Kapranos apologised for having a cold and then the band began to audibly suffer from the strain of their front man’s performance. And peppered into the hits were songs from the band’s easily forgotten third album, making for an overall disappointing show from the night’s ‘big’ closers.