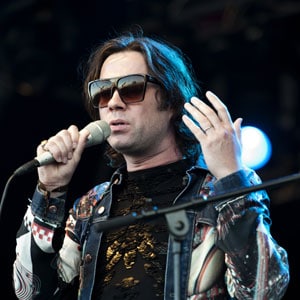 On to Day 2 of Barcelona’s Primavera Sound festival, and some more highlights…

Good weather once again graced the festival grounds as Rufus Wainwright took the main stage Friday evening. Against the setting sun Wainright gently strummed his guitar and pressed on his piano keys while expertly crooning through his catalogue of soulful pop tunes. Decked out in a white denim suit with intricate designs of spirals and suns and things, Wainwright certainly looked the part of pop performer. His songs slinked by with the help of sax, synths, guitars, and backup singers, all of whom matched his laid-back delivery without a fault.

The San Franciscan duo Girls also had backup singers – three ladies who added much presence to the indie rockers’ light, airy tunes. They performed dressed in light pastel colours and with bouquets of flowers strapped to each microphone stand (and other additional bouquets reserved for throwing into the audience after the show). Their dreamy ’60s style pop went over well with the massive audience, which tended to sway in place to the tunes.

Right outside of the festival grounds proper there is a large malformed 3D triangle of a building dubbed the Auditori Rockdelux. This was the only festival stage with indoor, limited seating and was reserved for select groups like Big Star’s Third, a massive assemblage of musicians paying tribute to the classic pop rock group’s third studio album, Third/Sister Lovers, by playing straight through it. In addition to standard rock instruments – drum kit, guitars, bass, keys, the occasional saxophone – there was a string quartet (replete with conductor) and a set of timpani drums. A rotating cast of singers came out to perform the songs – Yo La Tengo‘s Ira Kaplan & James McNew, Sharon Van Etten, Brett Harris, Ken Stringfellow (of The Posies and R.E.M.), Alexis Taylor (Hot Chip) on a killer rendition of Femme Fatale, and Wilco‘s Jeff Tweedy, John Stirratt, and Pat Sansone, to name a few. The performance was a masterful display of musicianship bringing to mind epic performances like The Band‘s The Last Waltz. Drummer Jody Stephens, the sole surviving founding member of Big Star, has created a loving tribute to his influential (and underappreciated) group that was one of the highlights of this festival.

Three decades on, Robert Smith (barnet still untamed) play a three hour set to match. The biggest crowd of the festival watches, with plenty of space provided for all the hits. Epic in every way.

“We played here two years ago and couldn’t wait to fucking come back,” Sleigh Bells’ Alexis Krauss announced at the Pitchfork stage. “We play a lot of places and this place is… probably top two.” Surrounded by six full stacks of Marshall amps, two ham-fisted guitarists and an audience of ravenous supporters, Krauss screeched out the Brooklyn group’s hits through a wall of loud-to-the-point-of-grossly-distorted sound. Manic backing tracks pounded hundreds of ear drums and although it was hard to process the chaotic songs after experiencing the delicate nuances of Big Star’s Third, at least Sleigh Bells, unlike fellow hyped-to-hell group The xx, had energy.

The Surprise Showstoppers Of The Night award goes to Brooklyn’s The Drums who had the unfortunate billing of playing after The Cure‘s (extended) set and before The Rapture‘s closing performance. They stole the show. Though their recorded sound emphasizes sparseness and electronic sounds, the band play full-on dance rock in a live setting. Onstage, they roared with guitars, synths, and a relentless rhythm section while captivating singer Jonathan Pierce played nearly every card out of Morrissey‘s deck – grossly flamboyant gestures, limbs akimbo dancing, awkward poses, awkward clothes (a black shirt with a blue jaguar head on it tucked into very high black jeans with a very large black belt), and enough repeatedly sung phrases and nonsense vowel sounds to give The Smiths‘ leader a run for his money. Despite this identity theft of sorts, The Drums made a name for themselves as a truly great live band.

The Rapture are also indie dance rockers and also from New York, but their performance differed quite a bit from that of The Drums. Front man Luke Jenner hinted at a David Byrne influence as he led his band through a set of funky, pulsating songs. The Rapture provided a relatively relaxing, albeit danceable, close to the night’s festivities.