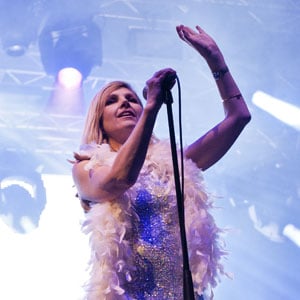 Once upon a time there was a decade called the ’90s and a strange music collective called Elephant 6. Among the half-dozen bands spawned from this collective were glam rockers Of Montreal, indie popsters The Apples in Stereo, and something known as Neutral Milk Hotel, led by one Jeff Mangum. Mangum, who became the JD Salinger of indie rock after recording his 1998 masterpiece, In The Aeroplane Over The Sea, and subsequently disappearing off the face of the planet recently came out of retirement/exile to play his old songs. Naturally, demand to hear Mangum perform these songs he wrote in the ’90s was high. With just him and an acoustic guitar (in pretty much the same manner in which these songs were recorded) he executed them flawlessly. Rabid fans literally jumped out of their seats when Mangum came out and announced that they could sit at his feet just the below the stage. After that, Mangum was only visible from the chest up, and with his chin-length hair and scruffy beard and with hundreds of his fans kneeling before him, his hour-long performance resembled something like Jesus preaching some fucked up parables to the huddled masses.

Maryland’s duo of Victoria Legrand and Alex Scally delivered a satisfying blend of shimmery guitars and reverberated vocals. Though they have relatively slow songs, Beach House brought an exciting atmosphere to the stage that transferred to the audience. They produced an elegant atmosphere for their sweet-as-honey, carefree material.

London’s own Saint Etienne showed off their performing power on the main stage with a tight set of highly enjoyable dance tunes. In a dress of white sequins, Sarah Cracknell sang through bubbly techno, Hot Chip-like modern dance and throwback retro sounds with equal aplomb. A backup singer (in black sequins) filled out the vocals as Bob and Peter worked from behind tables to produce the peppy music.

Power trio noise pop rock Jersey natives Yo La Tengo owned the MINI stage, delivering one of the best performances of the festival. Guitarist Ira Kaplan, bassist James McNew, and drummer Georgia Hubley are stitched together in sound, trading off vocal duties on songs that range the gamut from light pop to heavy noise rock along the lines of Sonic Youth. After 90 minutes of solid material, the group launched into their behemoth of a song, Pass The Hatchet, I Think I’m Goodkind to close out their set. A bass and drum loop of over 10 minutes created a hypnotizing effect while Kaplan switched back and forth from spitting out lines into the microphone and summoning demonic noises from his guitar.

Primavera Sound’s last main stage spot was reserved for French electronic wizards Justice. The duo were a fitting choice to close the festivities as they had the most elaborate stage setup and light show of the weekend. Eighteen Marshall amps were stacked up on either side of a huge contraption that looked like an old-time scientist’s blinking computer. Rising from the faux computer were frosted plastic tubes resembling the pipes of a church organ. And squarely in the middle of it all was a huge white digital cross. Jesus Christ. With an obvious nod to Daft Punk, Justice ran through their extended jams of very loud, very intense beats, samples, and sound sucks, toeing the line of dubstep. Meanwhile, overhead lights flashed in time to the music and cast blinding spotlights into the crowd. The spectacle was a perfect send off to the massive festival, a chance for everyone to dance off the substances and greasy food consumed, a virtual fireworks display to conclude three long days of some of the best music in the world.