by Matt Cotsell
published: 11 May 2018 in Live Music Reviews
Tweet 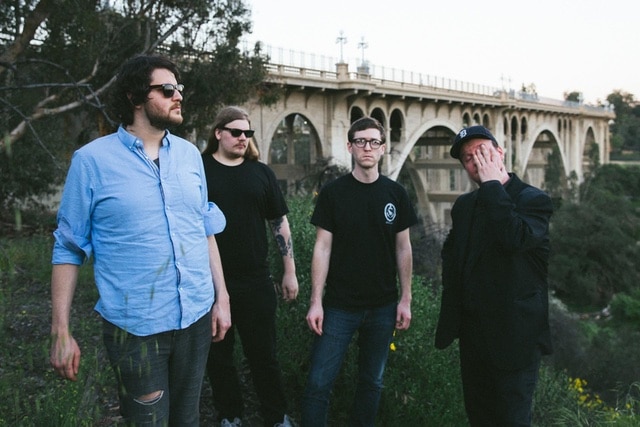 It’s usually obvious when you go to a show if it’s the last date of a tour. The signs are pretty unmistakable, from the tightness and apparent speed of the songs played, through to the movements of the performers, who are often a little feral or subdued, with exhaustion or relief. With Protomartyr it’s a bit harder to spot these tell-tale giveaways. It’s obvious that they want to get home, back to their beloved Detroit – front man Joe Casey makes a deliberate point of telling the rapt crowd that they will do only a short encore as they have a train to catch – but first they are going to get the rigour of the tour and some other gripes off their chests.

They open with recent favourite My Children, with its David Bowie referencing coda, and the hall erupts from nowhere. As he spits out the song’s motif of “pass on, pass on”, a swarm of defiant fists pump the air and solemn male necks snap back and forth in appreciation. The sound system is mixed rather muddily, with vocals low and drums high, but the eager audience knows every word and they yell along enthusiastically. All around is a sense of the music rallying the audience, uniting and liberating. Not that Casey would seem to notice. He spends the length of the concert dancing a maypole jig with his microphone stand, flipping the bird to anyone inconsiderate enough to push their phone in his face and disapprovingly shaking his head at the mosh pits that spring up. Watching him perform is seeing a man wrestle with his inner demons and upon winning, finding that the frustration is still there.

It’s this stumbling anger and confusion that should repel fans but it appears to do the opposite. He is a coiled snake, perennially being stepped on, waiting, barely moving, hiding in the space behind the lights, ready to strike, summoning a rage and fury from out of the ether. There is something magnetic about when he explodes. Support act Ana Da Silva from legendary post punk group The Raincoats clings to the side of the stage watching the proceedings with a sense of wonder. His verbose lyrics struggle to contain themselves within the often relentless, sometimes delicate musical background.

He gets a lot of vocal comparisons to the late Mark E Smith and indeed both are known for dense lyrics that transcend the generic love soliloquys of less well-versed lyricists. There are moments of unyielding repetition, such as during Up The Tower, that includes a section where he snarls “throw him out” an astounding 28 times. On the flip side, the single Don’t Go To Anacita references the plight of migrant workers, the benefits of drinking kombucha, the threat of police goon squads and transplanted poplar trees in its short punchy run through.

Bassist Scott Davidson is probably the most flexible of the band, gently lunging across the stage, whilst drummer Alex Leonard shines under a spotlight, his slight frame hiding the colossal momentum that he adds to the proceedings. There’s a sense that the band don’t want to idle, songs mesh into each other to the crowds delight, pleasantries are spared (although we are told this has been one of the best shows the band feels they have performed) and it’s all over rather quickly.

Early on in the set, during the pummelling Wheel Of Fortune, from the forthcoming Consolation EP, Casey screams “I decide who lives and who dies” over and over, and you realise he’s probably telling the truth, that this is the moment destiny has come calling. Just pray that you’re in his good books.