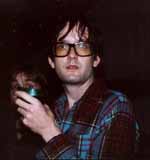 I wish I had long fingers. You can do so much with them. Jarvis Cocker can turn his into birds, creeping plant tendrils and much else besides, quite apart from the standard cocked-wrist gestures. He seemed on pretty good form all round, actually, having checked early on in the proceedings that all the required bits of anatomy were in working order… wrist, elbow, shoulder, knee… in fact everything you need to do a “funny little dance”.

The band was in good working order too, featuring – as has recently become customary – the accomplished Richard Hawley on acoustic and slide guitar duties. As if Hawley’s appearance and Jarvis’s anatomy check weren’t enough, the evening was enlivened further by some terrific video compilations (as one would expect from Jarvis, a sometime film student). Beginning with a gorgeous, blatantly sexual orchid and working through a multitude of flowers (lots of poppies) and shoots bursting into life, this was a beautiful and fitting backdrop for Weeds, the opener. Other parts of the film programme were rather retro (for The Night That Minnie Timperley Died) or just plain strange (Jarvis sticking a camera down his throat for a great version of F.E.E.L.I.N.G.C.A.L.L.E.D.L.O.V.E.), but always effective.

Unsurprisingly, there was a lot from the new album, We Love Life. I Love Life sounded more interesting live than on the record, while The Birds In Your Garden, an extended Bad Cover Version, The Night That Minnie Timperley Died, Trees and Sunrise (which ended the main set) were all excellent, the mosh pit jumping about to Sunrise especially. The real euphoria was kept for the selection of golden oldies, however, among them a very welcome Something Changed, Sorted for Es & Whizz, Babies (yes!) and Underwear for the second encore. We also got two tracks from This is Hardcore, including the sultry title track, which sounded every bit as fine as it did in 1997.

As the first of three sell-out gigs in London, this gig showed that there is still a huge and highly loyal fanbase for Jarvis and co., whatever the singles charts say these days. Only one aspect marred the evening – the Brixton Academy. This venue really should be boycotted. Outrageous prices for cloakrooms and booze, horrendous queues for everything and staff who have obviously been to the Anne Robinson Charm School – why do we put up with it? Only ‘cos it’s you, Jarvis…