by Jonny Carey
published: 27 May 2011 in Live Music Reviews
Tweet 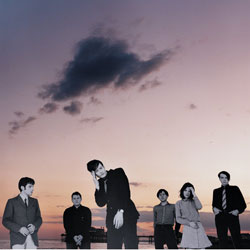 Nearly a decade after bowing out in a warehouse in Rotherham, Pulpreturned officially to the live arena, via a ‘secret’warm up show in France, at the Primavera Sound festival in Barcelona.

From the outset it’s clear who the big draw of the festival is, thesite is the busiest it’s been and fans take their spots at themain San Miguel stage an hour before stage time. The patient puntersare treated to messages on the curtain draped over the stage (rangingfrom “Clap your hands” to “Shall we do it?”).

Then, bang on time at 1:45am, the opening chords of Do You Remember TheFirst Time? bellow through and the crowd go absolutely insane,screaming along to every word and jumping for joy (no mean feet on atotally concrete festival site). What follows is a greatest hits set,heavy on their commercial peak mid-’90s classic album Different Class(including the first airing of Disco 2000 in some 15 years). The reformed line-up includes aRussel Senior, who left in 1996.

Aside from the singles, other notable highlights are a breathtakingF.E.E.L.I.N.G.C.A.L.L.E.D.L.O.V.E., I Spy – which is followed by a marriage proposal for for two punters in the photo pit – andPink Glove.

Jarvis Cocker’s twitchy, unique dancing style is as it ever was and the between song banter as rich,with a particular ode to Barcelona, it being the last city theypreviously played in with Senior.

Two post-Britpop era tracks get an airing – This is Hardcore and Sunrise,the latter from We Love Life. But predictably it’s Common People that causes the most commotion. Jarvis dedicates it to protesters currently staging sit insthroughout Spain, with a one song encore of Razzamatazzdedicated to the Barcelona club night of the same name to part with.

Some hardcore fans may have been disappointed on the hit-heavy natureof proceedings. But for getting the public back on their side whilstbeing clearly a bit on the jittery side, this gig was nothing short oftriumphant. Playing together again, will Pulp rediscover their raison d’etre? Or will this summer tour of festivals be a swansong? Time will tell.