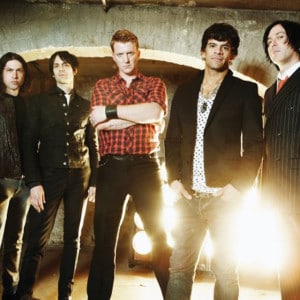 Is there a cooler man in rock than Josh Homme? The Queens Of The Stone Age frontman was in fine form as he rattled through the band’s now extensive back catalogue during their second consecutive night at Wembley Arena. While the band line-up has changed over the years, Homme has always remained its focal point, and it’s easy to see why Alex Turner turned to him when the Arctic Monkeys wanted to go in a new direction.

From the opening riff of You Think I Ain’t Worth A Dollar, But I Feel Like A Millionaire to closer A Song For The Dead – both incidentally, from the band’s classic third album Songs For The Deaf – Homme commanded the stage and left the excitable crowd in raptures following a bewildering display of thrilling guitar wizardry. Few can do it better and even fewer make it look quite so easy as the imposing ginger frontman.

Yet while most of the band’s most recognisable tunes were on display, the night was more about Queens Of The Stone Age’s latest record, …Like Clockwork. The album, which is arguably their best since Songs For The Deaf, was critically acclaimed when it was released and, based on the evidence at Wembley Arena, seems to already be very much a favourite among fans.

The first taste of their sixth studio album came with its lead single My God Is The Sun, which provided the perfect follow up to the formidable No One Knows. The song’s ferocious guitar riff – as well as its relatively straightforward and singable chorus – made its transition into the Queens Of The Stone Age’s live set virtually seamless. In fact, like much of the new record, the live version of My God Is The Sun actually sounded even better than the studio one.

Outings for I Sat By The Ocean, If I Had A Tail and Kalopsia provided further proof of just how comfortably …Like Clockwork fits in with the band’s older material. However, while the crunching guitar hooks and grooving basslines were ever present, it was the album’s softer, more psychedelic moments that really added something different to proceedings; in particular, the piano-based title track, which was a mesmerising example of Homme’s songwriting ability.

Another highlight of the performance was Fairweather Friends, which appeared to benefit the most from the live treatment. Despite featuring the star turn of Elton John on the record, it really appeared to gain a new lease of life, with Homme’s unique falsetto coming into its own on the monstrous chorus. But as great as …Like Clockwork sounded, there’s just no beating some of Queens Of The Stone Age’s signature tracks.

Burn The Witch and Little Sister were the only two showings from their often forgotten fourth album, Lullabies To Paralyze, while one of the best receptions of the evening was reserved for the sultry perfection of Make It Wit Chu. It was swiftly followed by Sick, Sick, Sick – another favourite from Era Vulgaris – before the spine-tingling riff from Better Living Through Chemistry reverberated throughout the arena.

The thrilling urgency of Go With The Flow finished off the main set, yet there was no way anyone was letting Queens Of The Stone Age go anywhere without an encore and the band duly obliged. The Vampyre Of Time And Memory kicked the three-song climax off, with its slow, piano-driven melody building towards its satisfying conclusion, before Feel Good Hit Of The Summer and A Song For The Dead demonstrated exactly why the band are so well loved.

It is also worth mentioning the impressive imagery that appeared behind the band during their set. There was a cohesion between the moving designs on the giant screen and the setlist that was executed with a touch of class, something also evident throughout the show itself. Queens Of The Stone age are undoubtedly on the top of their game right now, so don’t be surprised if they dominate the festival circuit next summer.