by musicOMH
published: 6 May 2008 in Live Music Reviews
Tweet 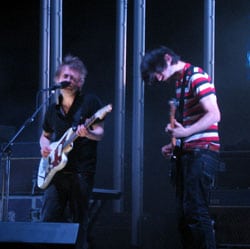 Radiohead’s constantly evolving sound has gained the Oxford quintet an assortment of avid fans over the years.

It shows in the audiences of their current tour in support of In Rainbows: stoners, hippie types, indie kids, party people and rock fans young and old, tonight all packed into the curiously designed (think clamshell atop concrete pillars) Ford Amphitheatre in Tampa, Florida.

The venue, nestled in fairgrounds and surrounded by multiple interstate highways, had trouble evoking the classic Greek aesthetic that its design referenced as constantly passing traffic and flashing security vehicle lights impinged.

Nonetheless, without the walls, the amphitheatre proved to be a wonderful setting for Radiohead, allowing the band’s massive sound to breathe. When Radiohead took to the stage, the sun had set, the stars were coming out, and everyone in the crowd of thousands rose to their feet for opening number All I Need.

The band seemed subdued at first but picked things up with a rousing rendition of There There, unveiling a series of large digital screens overhead that followed each band member’s actions. There were also hanging ropes that served as light curtains, changing colors with the moods of the songs and displaying bright, mesmerizing patterns.

Radiohead’s lush sounds were complimented by these exquisite visuals, which soon became an extension of their sound. Digital waves rose and fell with the ebbing guitars of Weird Fishes/Arpeggi; frantic, jumbled red lines jerked about with the pulsating bass of The National Anthem; and dreary grey screens projected close-ups of Thom Yorke as he sang the tortured melody to You And Whose Army.

Camera angles could change suddenly and unexpectedly on the screens, but the visual components appeared to follow a coordinated effort with the music, enhancing the experience tremendously, especially considering that the amphitheatre’s own screens went unused at the band’s request.

Equipment changes ran rampant as the band worked its way mostly backward through their discography. Yorke traded off instruments between songs as stagehands brought out pianos, electric and acoustic guitars, and, one time, another complete drumset, which Yorke used exclusively for the new tune Bangers & Mash.

Meanwhile Jonny Greenwood filled in roles on lead guitar, piano, synthesizer, and auxiliary percussion, many times doing two things (such as shaker and keyboard) at one time. He even picked up a bow (Jimmy Page-style) for Pyramid Song.

The band occasionally dropped their instruments entirely for the electronic-based songs from Kid A and Amnesiac, sitting down on the stage and finding a button to press or a knob to twist on a nearby piece of equipment. Other times, like on the tribal There There, most of the band picked up a pair of drumsticks to add to drummer Phil Selway’s spot on beats. All the equipment changes showcased the band members’ musical proficiency.

As if things weren’t extravagant enough with the lights, screens, equipment changes, and encompassing sounds, Radiohead stuck around for two encores, digging into deep riffs from The Bends and extending their set to twenty-three songs across more than two hours. Despite the extended performance, every element of the band from Yorke’s impassioned singing right down to Selway’s steady beats locked in throughout the length of the night, unleashing a barrage of rock splendour.