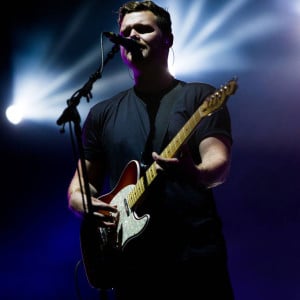 From the very moment the first acts were announced, it was clear that Reading 2015 would be one of the most eclectic events in the festival’s history. With Mumford And Sons sharing headlining duties on the Main Stage with Metallica and The Libertines, the line-up demonstrated just how far the festival has come in the last few years – especially from the early 2000s, when artists faced being bottled off stage if they didn’t meet certain criteria.

Mumford And Sons are the kind of band that could have suffered such a fate when Reading was a more traditional rock/metal festival, but off the back of their heaviest record to date, the quartet put on a show worthy of their headliner status. In fact, while new tracks such as Believe and The Wolf from Wilder Mind were well received, it was their older material that produced the loudest ovations. The early appearance of I Will Wait – from second album Babel – and Little Lion Man in the set warmed up the expectant crowd nicely, with the latter’s monstrous “I really fucked it up this time” chorus producing one of the biggest sing-alongs of the weekend. The Cave continued the party atmosphere, while an epic version of Thistle & Weeds must have left some of the naysayers eating their words.

It has to be said that their set was far more engaging than alt-J, who made the step up to the Main Stage before them. Doubts about whether their quirky, introverted style would be able to make the transition started to materialise after the foursome got off to an incredible start with a haunting version of Huger Of The Pine, followed by Fitzpleasure from their debut LP, An Awesome Wave. The set itself was largely impressive – with Taro and Breezeblocks among the highlights – but the band’s aloof performance made it tricky in places for the audience to really connect.

There was nothing flat about the return of Bastille, though. The band’s huge hits Flaws and Pompeii were readymade for festival sing-alongs, while their popular mash-ups of No Scrubs also made a welcome appearance.

Saturday was all about one band – and they were not even on the line-up. There were rumours about Foals playing a secret set earlier in the week and they confirmed the news on Twitter just hours before taking to the NME/Radio 1 Stage. Despite only having 30 minutes, Yannis and co delivered a stunning six-song set that suggested they are more than capable of being future Main Stage headliners. A sprightly version of My Number blasted away any cobwebs that festival-goers had after day one, before Mountain At My Gates – taken from their new album What Went Down, which was released the day before – and Inhaler ensured not one person in the tent was standing still. The beautiful Spanish Sahara demonstrated Foals’ versatility, while final song What Went Down concluded the set with an intense flourish.

It was going to take something pretty special to top Foals and punk duo Slaves were undoubtedly up for the challenge. Laurie Vincent and Isaac Holman certainly know how to entertain a crowd, with the rammed NME/Radio 1 tent a testament to the success of their major label debut Are You Satisfied? Primitive versions of Cheer Up London and Hey went down a storm, and it will not be a surprise if Slaves are rewarded with a Main Stage slot next year as a result.

The same opportunity could also be presented to Everything Everything, despite the fact the Manchester quartet are a completely different proposition to Slaves. Following the release of their critically-acclaimed third album, Get To Heaven, they triumphed on the NME/Radio 1 Stage in their signature matching outfits.

Older tracks Kemosabe, Cough Cough and Photoshop Handsome produced instant sing-a-longs – with audience members attempting to replicate front man Jonathan Higgs’ incredible vocal range – while newbies Regret and Distant Past were met by an equally rapturous reception. The whole set was a masterclass from one of the best bands currently operating in the UK.

They were followed on the NME/Radio 1 Stage by Catfish And The Bottlemen, who have gone from strength to strength ever since the release of their debut at the end of last year. Thanks to regular airtime on Radio 1, they attracted a huge crowd and were able to rely on most of those present knowing the lyrics to their addictive nuts-and-bolts anthems, with Kathleen and Homesick the standout moments from the set.

Part of Catfish And The Bottlemen’s appeal is down to their youthful outlook – with lyrics that any angsty teen can relate to – and this is something that has also earned Festival Republic Stage headliners The Wombats many fans over the years. For those who craved something other than Metallica’s monstrous metal spectacular, the indie three-piece from Liverpool were the ideal alternative.

The Wombats have always been aimed at a specific audience and the fact that their debut album essentially soundtracks The Inbetweeners is undeniable evidence of that. Kicking off with Moving To New York, they proceeded to give the packed tent plenty of reason to be cheery despite the miserable weather outside. Kill The Director and Let’s Dance To Joy Division ensured everyone finished Saturday night on a high.

Sunday’s Main Stage line-up was without doubt the pick of the weekend as soon as it was announced and it didn’t disappoint. The Gaslight Anthem may have been strangely subdued, but what the New Jersey band lacked in energy was more than made up for by a raucous performance by Reading Festival favourites The Cribs. The Jarman brothers were followed by an equally impressive performance by The Maccabees.

In fine form following the success of their fourth album Marks to Prove It – their first to reach Number 1 – the London-based five-piece played a set that spanned their 10-year career, including popular oldies Latchmere and Precious Time. It was the perfect warm up for the return of Jamie T to Reading Festival, following his secret set at last year’s event. The Wimbledon troubadour had the crowd in the palm of his hand throughout his set, with classics Sheila, Sticks ‘n’ Stones and If You Got The Money earning enthusiastic sing-a-longs. Yet as good as those were, the best moments came from third album Carry On The Grudge. Peter provided ferocious attitude, while the high-energy of Rabbit Hole and pure, infectious joy of Zombie made Jamie T’s set one of this year’s highlights.

His performance was only surpassed by the final two Main Stage acts. Headliners The Libertines returned to the scene of their 2010 comeback, but this time with new material and new purpose. The new tracks from the soon-to-be-released Anthems For Doomed Youth made a huge impression, with Gunga Din and You’re My Waterloo already fan favourites, while classics such as Time For Heroes and What A Waster still sound as brilliantly raw as they did on release.

In fact, Reading 2015 would have been all about The Libertines’ heroic return had it not been for Kendrick Lamar. With Tyler, The Creator banned from the country, it was left to the rap superstar to perform a festival-stealing show. It not only confirmed that Reading is now much more inclusive than it has ever been – fellow rapper 50 Cent was bottled from the stage in 2004 – but that Kendrick is a legend in the making. The early part of the set concentrated on Good Kid, M.A.A.D City, with Backseat Freestyle, Swimming Pools (Drank) and Bitch, Don’t Kill My Vibe all making an appearance. Seizing on the crowd’s energy, Kendrick then closed out the set with To Pimp A Butterfly tracks Alright and King Kunta, before returning for one more track to conclude a game-changing set. It ended what may not have been a vintage year, but there was no doubting that Reading 2015 certainly had some vintage performances.