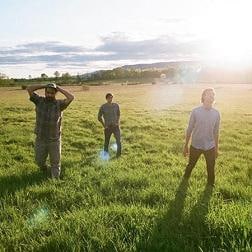 Real Estate in the Garage with Twin Sister? Sounds like a property development gone wrong, or a love triangle unexpectedly exposed, but in reality this blissful evening provided a neat pairing of two recent Domino acquisitions.

First up were the eclectic Long Islanders Twin Sister, so labelled for their ability to express themselves in a number of different musical styles. That was not quite so evident in performance as on their recent album release In Heaven, but there was still a sprinkling of fairy dust laid down by enchanting songs such as All Around & Away We Go, where the thick, misty sound so loved of shoegaze bands was in evidence.

The band describe themselves as ‘slack, yet focussed’, and that seems an apt way to label their approach, with singer Andrea Estella content to peer at the audience from beneath the brim of her black hat, her vivid blonde hair almost totally hidden. There were enjoyable forays towards funk, for which the bass guitar of Gabe D’Amico provided the foundations, but it was Estella’s voice that held the attention best, despite its position too far back in the mix. Spatial keyboards and deep blue lights added to a slightly otherworldly atmosphere, brought back to earth by the constant chatter going on towards the back of the sell-out crowd.

Thankfully noise levels abated and voices turned to song for Real Estate, who arrived on stage with a cheery nod and a wave. If you were to close your eyes at any point during this set you could have been transported to the west coast, circa 1968, but there was more than enough intervention from the present day to stop this from feeling like a derivative gig.

The singalong It’s Real cast its inevitable charm, but so did the airy Easy, fresh as an Autumn morning. Out Of Tune, its lyrics hinting at disharmony, found an unexpected descriptive aid through the intervention of a Juno synthesizer which was, funnily, out of tune with the guitars for a while, and strangely effective for that. Ending with a coda of All The Same was a sound move, the hypnotic guitar riff appearing over and over.

To finish they offered a warm hearted cover of Felt‘s Sunlight Bathed The Golden Glow, the lights offering a visual complement, the band’s music redolent of late summer. The golden glow stayed long after the band had gone, giving some welcome warmth to face the night – but also supplying proof that using West Coast pop as your basis can still work a treat, providing your own invention matches it.