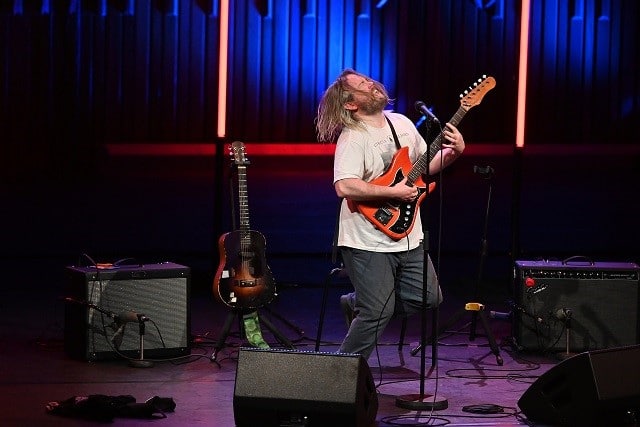 In 2019 Richard Dawson released an album called 2020, a kind of contemporary condition-of-England novel in musical form, in which he gave voice to a diverse cast of characters who exist in various states of anxiety: a ground-down Amazon warehouse operative, a UFO obsessive whose hobby has led to the breakdown of his marriage, a parent dropping their daughter off at university. It was a series of wonderfully detailed and sensitively described portraits of a fraught society that has since been fractured further by a year 2020 that could not have been predicted.

Despite a string of cancelled gigs, Dawson seems to have had a productive 2020. With his partner Sally Pilkington, he released a series of 49 ambient drone albums hastily recorded in lockdown under the name Bulbils; and recently a new record from Hen Ogledd, the group he is a quarter of along with Pilkington, Dawn Bothwell and Rhodri Davies. But this solo show, as part of the Live from the Barbican programme of live-streamed concerts, is the Geordie songwriter’s first gig in a while and, understandably, he seems a little on edge.

“I’m not a very polished performer,” he says, proving his own point as he straps his guitar on wrongly. “It would be horrible if I was though, wouldn’t it?” he adds, and he’s right: the mildly shambolic manner in which he conducts the gig lends a real warmth and sense of connection to the socially-distanced audience that sparsely populates the Barbican Hall. So does the nervous humour in his between-song patter, which ranges from an anecdote about his cat eating a packet of elastic bands to Dawson imagining blue movies beings projected behind him. This comic but shambling air means he comes across as a kind of hybrid of Bill Bailey, Tommy Cooper and Matthew Holness’ melancholy folksinger character Merriman Weir.

The lack of a formal setlist adds to the sense of disorganisation. At one point Dawson switches from electric guitar to a battered acoustic to play Fresher’s Ball, then decides an instrumental piece is more appropriate and switches back to the electric for a delightfully swampy rendition of Judas Iscariot. He also mulls over the right moment to introduce Joe The Quilt-Maker: “Is it too soon for a 12-minute a cappella song about a quilt-maker?” he ponders, before plumping for The Queen’s Head instead.

But when he does launch into Joe The Quilt-Maker he holds the sizeable room for the duration of the song with his voice alone. It’s not a conventionally beautiful voice, but it’s certainly captivating, ranging from passages of falsetto to brays and honks in the lower registers. His guitar playing is similar: using an unconventional tuning and his keen sense of what a well-chosen moment of dissonance can add to a song, he scratches and bends out music that’s raw yet rich in emotion.

Joe The Quilt-Maker comes mid-set but Dawson opens the show a cappella too, with The Felon’s Song, in which he vividly imagines the experience of a youth imprisoned in Hexham Old Gaol in the middle ages for stealing eggs. That serves as a kind of warm-up, but he closes the performance with another a cappella song, The Ghost Of A Tree. He howls his way through it while stomping out a beleaguered march on the spot, echoing the boots of the stricken travellers of that song, who lose members of their party as they trudge through a horror-film imagining of the Pennines. Dawson’s songs are compelling but often unsettling, telling as they do the tales of fragile souls living through tough times. They draw us in but don’t let us become too comfortable: ideal pandemic music.

Live from the Barbican continues until 13 December and is available for both live attendance and livestream at barbican.org.uk