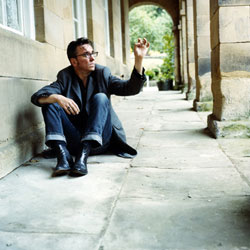 Where better to witness the soothing tones of Sheffield crooner Richard Hawley than in the beautiful surroundings of Islington’s Union Chapel? Its giant stain glass window is the perfect backdrop for this semi-acoustic Mencap benefit, headlined by the steel city mainstay.

Hawley tops a bill that begins early with a set from Sting‘s daughter, Coco Sumner, known as I Blame Coco. At the tender age of 19, in an oversized denim jacket and tiny shorts with pale matchstick legs dangling below, she oozes the rebellious teen trying to be an artist in her own right.

Her songs suggest she’s succeeding; this is indie pop with a hint of ’80s, stripped down for this opening performance. Even so, you can’t get away from the fact that her voice, her pronunciations, even her mannerisms are extremely Sting-like, especially with such songs as Summer Rain. Yet Kissing and No Smile show that, even though there will be comparisons, she’s worthy of a chance to be just Coco.

Host Jo Whiley had a glint in her eye when she came on stage to introduce the next group. “It’s not often Simon Cowell lets his acts perform elsewhere than on The X-Factor,” she says, before startling the audience by proclaiming Jedward was about to perform in the secret, unbilled slot for which the Little Noise Sessions are becoming known.

The crowd is even more startled when they see Arctic Monkeys lynchpin Alex Turner walk on stage instead, on a night that was meant to be his band’s only break from their current tour. Turner’s voice is soft, much softer than in a Monkeys gig, and he’s accompanied by just his own acoustic guitar, Fender Rhodes and, later, another guitar. It’s a set-up that brings a new-found wonder to his band’s music, shows off their fantastic lyrics and, most of all, gives Turner’s own voice a whole new dynamic. The performance of songs from recent album Humbug is gentle, and it ends with Turner going solo.

Next up is Corinne Bailey Rae in one of her first live performances since the death of her husband. Everyone is rooting for her and she delivers wonderfully. She begins with a Jimi Hendrix cover before playing songs from her new album and a couple of her debut’s. What’s lovely to see is that she smiles throughout her set. She’s glad to be back.

While her blend of mellow and ambient music is a little samey, her voice is sweet and her band, especially the three harmonising backing singers, are lovely. Bailey Rae is as delicate as Emiliana Torrini but with all the soul of Dionne Warwick.

But finally, on comes the man everyone’s been waiting for. Hawley has his dapper Teddy Boy look tonight. “This is the part of the show when we take the Hawley communion,” he begins in his syrupy voice, later explaining why he wrote a romantic song for his wife: “I thought I’d get a shag.”

His songs reverberate off the wooden pews of the chapel and hands reach over to hold others. It’s Hawley that makes this wonderful venue come alive, and he’s perfect for it. Accompanied by double bass, a great jazzy drummer and some occasional sublime slide guitar, he’s even joined by the ‘original lounge lizard himself’ Alex Turner for a Monkeys number, Only Ones Who Know. It’s great to see them together, but it doesn’t compare to Hawley’s own material.

A cover of Hushaby Mountain is a particular highlight, during which the audience is in the palm of his hands. After a simply magical Open Up Your Door, Hawley leaves to a deserved standing ovation.