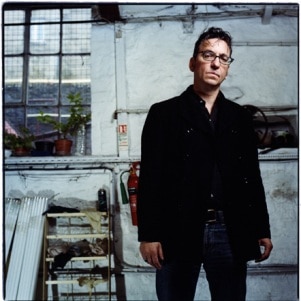 “Tonight we’ll be performing Sitting At The Sky’s Edge” quips Richard Hawley as he’s wheeled on stage at the Kentish Town Forum. “As you can see, I’ve broken me leg, there were this mad party and I were on a load of Es and there were loads of birds and booze” before revealing “I actually slipped on marble stairs at a kid’s party.” With the best quiff in music looking immaculate, one of the very few people allowed to wear sunglasses indoors is already on fine form. Launching into the psychedelic stomp of latest album title track Standing At The Sky’s Edge, you can tell that tonight’s show is set to be an absolute treat.

On a stage packed out with fake trees and a smoke machine doing its worst, the atmosphere is spot on for both Hawley’s new affiliation with psych rock and his long-standing penchant for beautiful balladry. Second track of the night Don’t Stare At The Sun is the perfect amalgamation of both; equal parts emotional croon and transfixing solo. His voice in particular sounds absolutely immaculate this evening. From hereon we’re presented with a near perfect set, spanning all the finest moments of his career. Here In My Arms and Tonight The Streets Are Ours purveying exactly why so many have fallen in love with Sheffield’s finest throughout his career – these tracks in particular illuminating him as a man who is, quite frankly, nothing less than a peerless songwriter.

The show is taken to another level with a spine tingling version of latest single, Leave Your Body Behind You. Already one of the premier tracks to emerge this year, it’s given an extra injection of vigour in an extended, jammed out live adaptation. When Hawley lets rip on the solo, you really realise how underrated a guitarist he is, playing with imperious passion and creativity. It’s these tracks from Standing At The Sky’s Edge that really stand out tonight; the full band, backing singers and all, providing each track with a rich sonic depth. In turn, Hawley’s voice switches effortlessly from his trademark croon to psychedelic swagger.”Thank you so much, without you…we couldn’t buy booze or cocaine” Hawley jests before a finale of Time Will Bring You Winter and particularly good Down In The Woods. However this isn’t the finale one would have assumed at this point, broken leg and all, he’s wheeled offstage just so he can be wheeled back on for a good old fashioned encore.

For said encore, we’re given two options. “Option 1, we play two songs, but one of them is a quiet one, so you’ll have to shut up. Or option 2, we rock out and leave…Option one then? So shut the fuck up.” Where most artists either engage in no crowd interaction, or are just plain irritating when they do, Richard Hawley’s crowd banter only serves to improve the overall experience. You’d struggle to see him live and not leave thinking him to be something of a legend.

Accordingly, silence is observed for a wonderful rendition of For Your Lover Give Some Time, accompanied simply by an acoustic guitar and piano, before a prolonged version of The Ocean brings a fitting end to what has been a truly special performance. Hawley raises a glass of wine and profusely thanks the infinitely appreciative crowd as he’s wheeled of stage. Lots of superlatives are thrown at Hawley, however each one is wholly deserved. If you haven’t seen Richard Hawley live yet, you should probably be at his Brixton show in October.