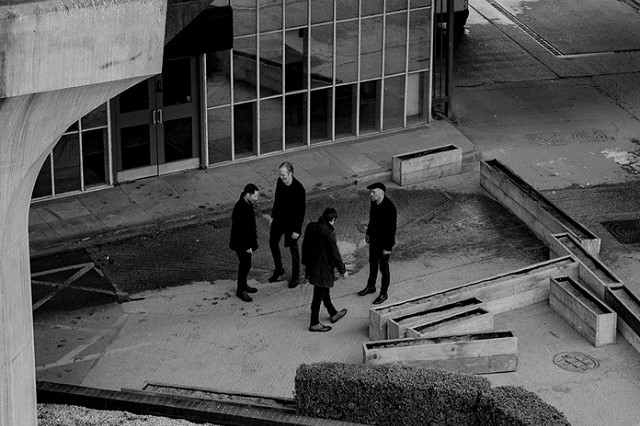 Recent years have seen a range of bands from the ’90s reform and return to the live arena. Many have been nostalgia-driven, focused on reprising former glories, but that’s not an accusation that can be levelled at Ride. The Oxford quartet returned in 2014, 18 years after they broke up, releasing fifth album Weather Diaries in 2017. This Is Not A Safe Place, their second post-reformation album, was released earlier this year and brought with it a noticeable upturn in quality.

The new songs understandably dominate tonight’s show at the Barbican. They open with Jump Jet, its chiming, polished guitar pop indicative of the highly listenable nature of the album. As Mark Gardener sings “this is life on the outside” the sense of liberation is palpable. Future Love follows, a sun-bleached glide of a song, that sees them sounding positively youthful despite their advancing years. As Gardener enquiringly sings “are we drunk on morning dew?” the feeling of rejuvenation is clear.

The formal, seated surroundings of the Barbican may initially feel strange for a band usually found in traditional venues but chairs are soon vacated by the sold-out crowd. The presence of fans wearing long-faded album t-shirts and others displaying the word ‘shoegazer’ prove they’re still a band people proudly associate with.

The new album continues to impress meanwhile. The smart, jangle pop of Fifteen Minutes is bolstered by guitar ignitions and offers a reminder of the immediate and accessible sound found in much of the new material. Shadows Behind The Sun strikes a more contemplative note, hinting at the acoustic warmth of their much underrated third album Carnival Of Light. Kill Switch is far more rampaging, tonight suitably supplemented by white strobes.

The tracks from Weather Diaries played tonight still more than hold their own. Charm Assault still has a boisterous directness, the closest they’ve come to a garage rock sound and Andy Bell’s guitar lines in Lannoy Point still light up the skies. In short, they’re both as bold as the capital letters emblazoned on the backdrop that spell out the band’s name.

Songs from their first incarnation may be a little curtailed but they still offer much joy when they do arrive. Leave Them All Behind is an early treat, its wall of guitar sound still thrillingly intact and the Taste offers one of the most kaleidoscopic moments of the show, transporting the audience back to the early ’90s. Chrome Waves sees them pick up the shoegaze baton in seamless fashion and Vapour Trail’s combination of oscillating guitars and languid vocals is as potent as ever. The serrated edges of Seagull clatter and soar and bring the show to a close. They may be preaching to the converted but tonight proved they’re going from strength to strength, very much still on an upwards curve.