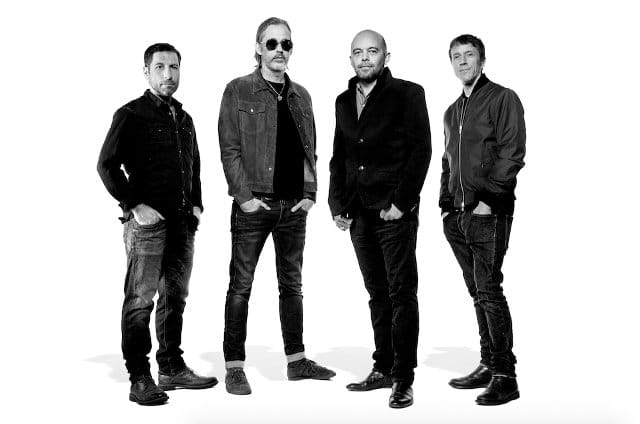 The recent shoegaze revival has proved to be more successful than anyone could have reasonably predicted. Slowdive have returned with a beautifully enriched album that may be the best of their career, not to mention some swirlingly immersive live shows (as most recently seen in London at Field Day). Lush’s comeback may not have yielded an album but their Blind Spot EP fused the best elements of their early and late periods and their gigs offered much in the way of dreamy guitar atmospherics.

The most warmly embraced return however has arguably been that of scene-leaders Ride. 2015’s live shows probably would have been sufficient cause for celebration but the announcement of a new album Weather Diaries added a welcome extra dimension and tonight’s show at Village Underground saw much of the new album aired.

They begin with two of the standout tracks from the album. Lannoy Point presents a new, subtler epic Ride sound, all radiating melody and gliding guitars. They follow it up by blasting through Charm Assault, which tonight sounds especially muscular and streamlined, offering a reminder of the power they can inject into their riffs. The elevated harmonies and spiralling guitars of Seagull and Like A Daydream take us briefly back to the early 1990s, but the focus swiftly returns to the new material.

Title track Weather Diaries is slower and more contemplative than the other new tracks but grows in stature while Cari sounds solid rather than spectacular, maybe closer to some of Andy Bell’s post-Ride forays into trad/alternative rock. The blended, gauzy, languid sounds of Home Is A Feeling fares much better, being the closest the new material gets to an original shoegaze aesthetic. All I Want meanwhile is full of effervescent guitar pop surges, managing to be both explosive and emotive.

As the set progresses old favourites assume greater prominence. Twisterella still conjures up the sun-soaked sound of summers long gone, blissful and airy. Taste gives off a supremely heady, euphoric buzz and is followed by the chiming, alleviating lightness of Vapour Trail.

They close their main set with the utter-destruction-through-noise that is Drive Blind, including the now customary feedback-strewn mid-section that seems to depict the sound of the universe falling in on itself. The colossal magnificence of Leave Them All Behind opens the encore, the relentlessly charging finale as thrilling as ever. Another new track, Lateral Alice, follows before they finish with a cover of Revolution by Spacemen 3.

Tonight’s show confirms just how re-invigorated Ride sound. Old cathedrals of sound are gloriously rebuilt and new, sturdy musical towers are constructed alongside them in familiar, sympathetic fashion. Let’s hope their presence on the musical landscape continues for some time yet.