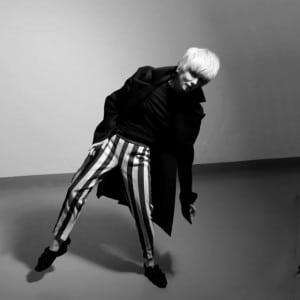 Róisín Murphy met with an accident a few weeks ago. While on stage in Russia the former Moloko singer bashed her head on a chair and damaged her eyesocket, causing the rest of her European tour to be cancelled. Happily for us Brits, she’s recovered enough for the UK leg of her tour.

Her band appear one by one, then two backing singers sashay on to the stage as a driving dance beat gets morphed and twiddled, eventually becoming the start of Cry Baby. Róisín appears with platinum blonde Veronica Lake locks and a Michelle from ‘Allo ‘Allo coat, a classic look that calls Alison Goldfrapp to mind, and strikes a pose. What follows is a glam show of haute couture verging on a rave, with extended intros and outros the order of play.

Tracks from her current album Overpowered make up the bulk of what follows. Rather than pausing for applause between tracks, everything runs together like a DJ set, reminding of her and Moloko’s ’90s dance background and Madonna‘s Confessions On A Dancefloor. Each number is accessorised to the nines. Róisín doesn’t depart the stage for lengthy costume changes, preferring instead to drape a selection of outlandish hats, gloves, tops, capes and sundry other apparel on a hat stand at the back of the stage. Visuals fire up to complete the transformation of KOKO from tarted up gig venue to catwalk.

Movie Star is a shimmying highlight, while Primitive casts her in a robot role to a minimalist sheen. Checkin’ On Me continues the upbeat mood and Let Me Know harks back to the piano-led dance days of Lisa Stansfield and Matthew Herbert. Across it floats Róisín’s voice, an instrument that has failed to attract much comment. It’s warmer than Alison Goldfrapp’s glacial tones and in a different league to Kylie Minogue‘s squeaks. She is a singer first and foremost, and the laid back Tell Everybody underlines it.

Of her earlier material, only Ramalama (Bang Bang) and Sow Into You get aired from her debut album Ruby Blue, and anyone hoping for some Moloko moments are placated with Forever More. All are greeted with cheers. On The Truth, she raps. And somewhere between all these she changes sunglasses.

But not every song holds interest. You Know Me Better starts off in compulsive dance mode but then repeats itself too much and seems to go on forever. Scarlet Ribbons is a lull – too close to Simply Red for comfort and the audience stop dancing and start chatting. The elongated intros and outros work well for the dancier numbers, but there’s too much that’s too slow in between them. But Róisín’s playful stage presence and stunning costumes provide the eyes with a feast that more than makes up for the saggy bits. At the end a hat transforms into a mask and she shimmies about the stage, as happy to look daft as a brush as to resemble a Hollywood legend. Then she has a choreographed punch-up with her backing singers.

Overpowered is a dance monster live – this version sounds like a remix of the title track. It closes the two-hour set to rapturous applause and it’s clear the ingredients are there for Róisín to stride across the world to her own beat. She’s more accessible than Gwen Stefani, infinitely more daring than Kylie. While the dish hasn’t quite baked yet, on tonight’s evidence there’s every reason to assume that when it does it will be worth waiting for.