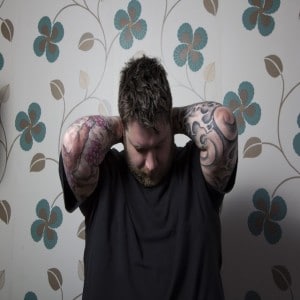 Events curated by musicians themselves are becoming a bit of a thing – from the ATP weekenders to the Southbank Centre’s Meltdown festival. Having the backing of someone on the ground is seen as a seal of approval, a mark of quality. It’s a nod to the wonderful eccentricity of Kings Place, that vast arts space tucked alongside Kings Cross station that’s also home to the Guardian, that it asked RM Hubbert – a prolific, if obscure Scottish guitarist and sometime singer – to programme a night.

Hubby, as he’s affectionately referred to by the acts he’s billed tonight, takes over the centre’s halls one and two. Tickets are available by the hall or for the whole evening. The sets are timed perfectly to allow punters to make the short trip across the bar between shows…like a conga line snaking back and forth every half an hour. The line-up is fantastically eclectic, with nods to both Hubby’s intricate guitar studies and his former role in post rock outfit El Hombre Trajeado.

The latter manifests itself in the shape of Grumbling Fur, who launch into their set by waving a pair of plastic Christmas cracker clackers which, in its weirdness, sets the tone. They’re really, really odd; flinging samples back and forth, revelling in feedback and warped vocals, they somehow mould a sort of psychedelic pop sound that’s as hooky as it is intense. The strange little loops and buzzes stay with you as perfectly formed ear worms long after they’ve shuffled off stage.

Ela Orleans also flies the flag for off-kilter electro, closing the night in the all-seated Hall One with a mind-crushing cinematic display. The Polish-born Glaswegian cuts a Nico-ish character, speaking only briefly to introduce herself before putting her head down to concentrate on the task in hand. A blistering attack of industrial pop flanked by an equally disturbing montage of religious imagery and creepy, haunting black and white projections. She evokes images of desolate landscapes, bombed out cities, with a fierce, critical eye. Her latest record, Upper Hell, is, unsurprisingly, inspired by Dante’s Inferno. It saw her join forces with producer Howie B, whose input can be heard in the dancier beats that are layered throughout her darker synths. It’s an intense, draining experience, leaving the audience eyeballing their friends as they leave, a sort of unspoken ‘woahhhhh’.

Elsewhere the mood was far lighter. Poor James Blackshaw sniffs and splutters his way through his opening set and spends a good two minutes noisily retuning his guitar between songs. Not that the audience cared, so engrossed were they in his intricate string plucking; he grappled and contorted to make that one guitar sound like a full band, and the likes of Confetti and Nothing Ever After were lapped up by the early arrivals.

Kathryn Joseph is the only artist tonight to focus on the voice. A sort of Bjork-ish cutesy whisper, it gets better the louder she dares herself to go, when she looses the effected, forced cushioning of her voice and just lets rip. A story teller who twists incredibly personal tales into fairytales, she stuns the room into silence, the spell breaking only when she takes her hands from the piano after each song. The atmosphere couldn’t be more different for fellow Hall Two act, tonight’s host RM Hubbert. It feels more like a singsong down the pub, as he chats with ease between his set, a selection of traditional folk songs and guitar master classes.

Giving the audience the choice between a song about Buckfast or “the best curry I ever had”, the cheers opt for the latter “the mince was like spicy little clouds, the peas were like a 12-year-old’s zits,” he tells us. And of course, the song is acoustic. He talks at length about the breakdown of his marriage, his crippling anxiety and depression, and of falling in love again. Car Song, which he wrote with Aidan Moffat and Alex Kapranos, is a highlight, as he carefully picks his way through a song packed with memories and hope – a sort of full circle, reflecting in the themes of some of his gloomier lyrics. It’s like finding the party host propped up in a hidden away bedroom, happy to chat, tell you some wild stories and pass you a bottle of something questionable. Indeed, at the end of his set he instructs everyone to go into Ela Orleans’ set and “rip up the seats”. Luckily no one does, as we’d really quite like to invited back to this party.