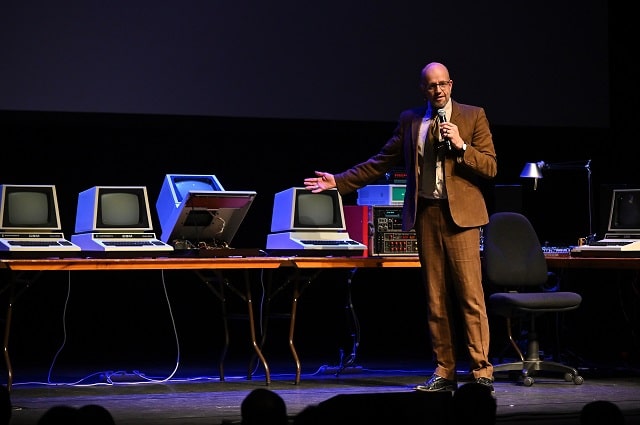 A small neon green rectangle pulses in the top left corner of a large black screen at the rear of the Barbican stage, eagerly awaiting instruction. Below on tables, are five 1980 Commodore computers, other similar era hardware and a mixing desk. People in the audience can’t resist taking photos, drawn to the all-in-one, cuboid shape of the machines. They clearly prompt nostalgic feelings for many, a visual reminder of the nascent technology enjoyed in their youth.

This is the set up for CMB 8032 AV, a show by German electronic musician Robert Henke, an electronic musician who has explored ambient, sound art, minimalist techno and more over the years (most notably under the Monolake name). He arrives on stage wearing a suitably retro-looking brown suit to explain the background to tonight’s show. Henke learned to code on similar computers during the 1980s and he recently bought one on eBay for fun. While getting reacquainted with it the idea for tonight’s show slowly developed. He wanted to see what music could be extracted from these five reconditioned, 40-year-old machines. He reels off numbers to demonstrate their slowness and limited capability. One machine runs a specially written sequencer, one generates the accompanying bright green imagery and the other three create the sound. 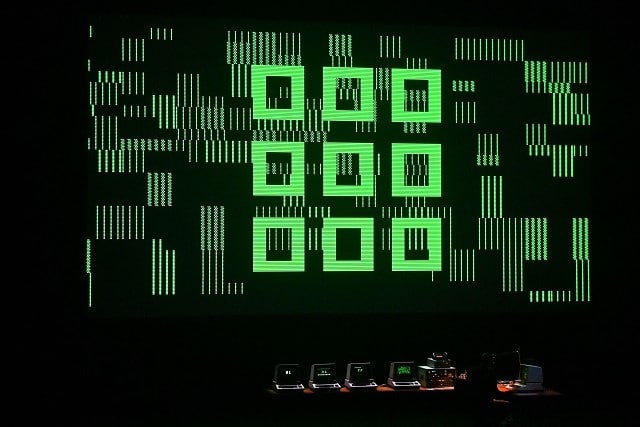 When entering the opening coding on the keyboard to fire up tonight’s show he makes a spelling error and has to delete the text and start again which prompts laughter around the hall. Once it does get going the initial noises are sluggish and distorted, like a primal digital language being resurrected for the first time in decades. Errant, isolated bleeps grow ever more frenetic and an array of pops, clicks and fizzes slowly emerge, resulting in a sort of proto-Autechre feel.

The show is succinct at 60 minutes, featuring several short pieces each which draw applause from the audience which give the event the feel of a scientific demonstration, an aural technological thesis. As it progresses snatches of strange, abstract melodies emerge amid the juddering and stuttering. White noise is pitted against elongated tones. We’re reminded of the sound of 1980s computer games loading. At one point the scrambled chorus mutates into what appears to be the electronic equivalent of helicopters swarming overhead while a pneumatic drill is operated in the middle distance. In some ways it shouldn’t be but it’s all highly listenable, engaging and satisfying stuff.

Henke does a good job at testing the limits of the technology and towards the end the machines seem to emit anguished wails at what they’ve been put through (although the final moments strike a softer, more plaintive note). As we leave it’s hard not to reflect on the impressive variety of sounds Henke manages to coax from the machines. For one night he made vintage computers sound strangely contemporary. 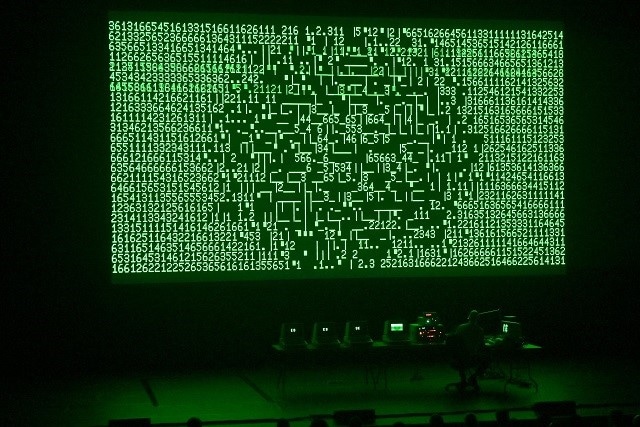