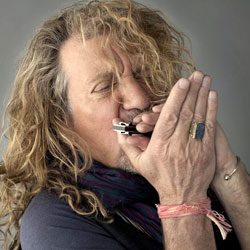 The mere glimpse of Robert Plant’s shadow – an outline distinguished by an uncontrollable mane of cascading curls – waiting in the wings whips the erstwhile reserved Forum crowd into a frenzy. “This is our first concert for 43 years in this town,” he tells his audience, many of whom have queued for hours to secure the best seats in the house.

Tonight’s gig is one in a series scheduled in the lead up to the release of Plant’s latest offering from his newly reformed ensemble, Band Of Joy.

Stood on a shabby old Persian rug and framed by the new line-up of the band he originally formed with the late Led Zeppelin drummer John Bonham, Plant looks every bit the authentic ’70s rock legend.

Gripping the mic with familiar frontman poise he opens the set with Down To The Sea, a hypnotic, heady hit from his 1993 solo album Fate Of Nations. American country singer/songwriter Patty Griffinsupports Plant with layer upon layer of pitch-perfect blue-grass harmonies alongside musician and vocalist Darrell Scott, and replaces Alison Krauss for Please Read The Letter and Rich Woman, the latter with Plant accompanying on harmonica.

Both tracks are from Plant and Krauss’s award-festooned album Rising Sands and warm the crowd perfectly for new editions House Of Cards (a rendition of Richard Thomson’s classic), Central-Two-O-Nine and the pre-released Angel Dance, all of which feature on the new album.

A stand-out of the set is All The King’s Horses which, accompanied by guitar virtuoso Buddy Miller, is all the more haunting live. Despite shedding the spray-on leather trousers, plunging necklines and tight fitted shirts there’s no mistaking Plant’s origins as he lifts the mic stand off the ground and wields it with rock ‘n’ roll style.

He ploughs his way through a tight and seamless set spanning the last three decades of his career, before finally rewarding his steely following with a raw but nevertheless on-the-money version of Gallows Pole, which leaves the crowd chanting for more. “Thanks guys, it’s been a blast,” the 62-year-old finally tells the crowd towards the close of a flawless two hours, prompting prolonged and deserved applause.

Plant predictably returns to the stage for a rip-roaring encore, culminating in the Led Zeppelin favourite Rock And Roll. It’s a timely reminder of his rock roots, but it’s the country roads he chooses to Ramble On now.