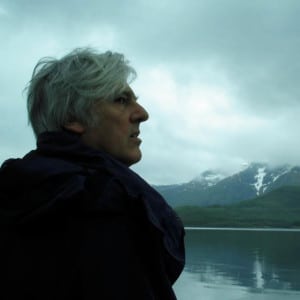 Up Great Ancoats Street, The National are playing in the relative expanse of Manchester O2 Apollo. But seeing Robyn Hitchcock at Band On The Wall (for those unfamiliar, The Band’s name comes from when it was the George and Dragon pub in the 1930s and a small stage was literally fixed onto the wall. It looks like a flimsy, perilous shelf) offered rewards of its own. Band On The Wall is a venue to treasure over the commercialised Apollo first and foremost, coupled with its intimate feel this evening – all seated, it feels like there’s hardly anyone here. Something to share with the few rather than the many.

For the first of two sets, Hitchcock arrives on-stage in a paisley shirt, his now characteristic silver hair shimmering in an almost Julian Assange like way. He looks very fetching. Museum Of Sex from 2006’s Olé Tarantula, played early on, actually turns out to be quite apt, especially with lyrics such as: “On this roof I play this riff, play it ’til my hands are hollow, you can play to the tomatoes, you can play to the Apollo.”

When he camply intimates to the audience to “let’s hear that riff!”, which is delivered in an enthusiastic yet underwhelming way (intentional surely?), no-one can help but laugh. Here, Hitchcock casts himself as the musician who never reached the heights of those down the road, for whatever reason: “In the end I’ll be a star.” The intimacy of The Band in some ways adds to this.

Robyn Hitchcock shows aren’t all about the music played, though. On-stage, his rapport with the audience is up there with any good comedian. “Bob Dylan was the Morrissey of the 1960s,” he suggests, and everyone succumbs to laughter as he goes into an in-depth comparison of the two before firing up Queen Elvis, with its tooting harmonica achieving a soothing quality when coupled with the comforting surroundings of a venue now far away from its once rough-edged image.

His interludes continue. “We [Brits] wear our misery on the exterior. The Americans are the opposite. We’re corroded on the outside with our misery, so we remain all right. It’s because we have one vital piece of information – we know it can’t be done. We’re united in our sense of disbelief. Americans are all can do and hard work.”

With that, Hitchcock leads into Dismal City – a “national anthem of Britain” – from 2011’s Tromsø, Kaptein. Some introduction, which everyone loves. “England is a dismal place, oh oh oh oh oh. I’ve got England on my face, oh oh oh oh oh,” he sings. Manchester is certainly dismal this evening. Cold and especially wet. But Hitchcock makes you oddly proud to be from these isles and appreciate our bittersweet ways.

It leads nicely into No, I Don’t Remember Guildford a bit later. On record, the additions of piano and touches of string add a degree of depth. Yet played live, with just hints of harmonica, the stripped down nature makes it even more affecting. A soul looking back onto his dead body. The sparse simplicity will always work.

From there, Hitchcock enters into conversation about Queen Victoria and King Albert. “They were amazingly fecund,” he says, emphasis on the “fec”. Everyone laughs. It introduces Olé Tarantula, with lyrics like “she squeezes her eggs, out they come tumbling on their spindly eggs”. What an image of Queen Victoria this creates.

The second set sees Hitchcock wearing a black and white polkadot shirt. With the death of Lou Reed, Hitchcock brings out New Age from Loaded. “Over the hill right now” takes on an apt poetry of its own, as the set descends into a mixture of songs that have the past, death or the dead lingering over them.

“Play Staying Alive!” shouts someone from the audience. He obliges, much to everyone’s delight, before making a smooth transition into David Bowie’s Golden Years and then River Man by Nick Drake, “another from a dead person”. A cover of Pink Floyd’s Bike – Hitchcock can project a Syd Barrett-esque vocal very well – and Love’s Andmoreagain come either side of Wreck Of Arthur Lee, with When I Was Dead and a cover of The Doors’ The Crystal Ship to end. You always need Jim Morrison in there when it comes to dead musicians.

Everything fits together and seems apt this evening, even if at times it seems coincidental. The venue, the songs, the banter. It all works beautifully. Despite the underlying subject matter, you feel uplifted by the end. Robyn Hitchcock is a master of bittersweet, of bleakness with comedy.