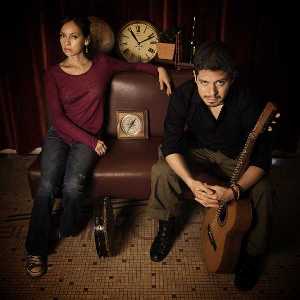 Early in their careers metal rockers Rodrigo y Gabriela ditched the heavy roots and took their punk principles to a more acoustic sphere. This has resulted in several albums, tours of staggering brilliance and collective wonderment at just how two guitarists can make such a brilliant racket.

Fans have been known to lose their eyesight trying to focus on the duo’s hands racing across their fret boards in a manic blur. This gig at the Academy was no exception and could have kept Specsavers in business for years to come. The pair ooze such vibrant energy when playing that it’s a wonder their biceps aren’t freakishly oversized and their wrists permanently cramped. At one stage it was difficult to tell if the drumming noises were coming from the backing band’s giant congos, Gabriela slapping her guitar or the sounds of Brixton’s jaws hitting the floor one by one in astonishment.

The pair are currently undergoing another shift in styles and have recruited a band of Cuban musicians to re-vamp their old sound and add an extra bit of spice to their back catalogue. Rodrigo explained to the crowd that it’s a way of keeping touring fresh and the duo clearly relished the addition of such exotic backing. Critics have been divided with regards to this move, and it is true that the gig worked best in the middle section with the band backstage and R & G easily filling the vacuum with some mesmerising playing. It’s a credit to the pair that they were so generous in sharing the stage, but the gig certainly worked best when they took the spotlight. In particular, the sound mix at the start looked like the couple were in danger of being swamped by their guests. Once things settled down there were some great moments to be had when the band began to shine, not least a thrilling piano improvisation.

Some fans chuntered disappointment of the lack of Stairway To Heaven – despite some cheeky teasing from Rodrigo. However, a Cuban cover of Led Zeppelin would probably have been a shade too Rolf Harris and it was a good call to omit it from the set list. There were admittedly a couple shaky moments when the band looked like falling into eighties jazz improv or dodgy Santana territory, but this was offset by some moments of brilliance – namely Diablo Rojo and the resounding climax of Tamacun. Perhaps in a different venue such as The Barbican the different styles and improvisation might have more of their desired effect.

However, after playing with such verve and energy for the best part of two hours, it would be wrong to assume any doubts about the new Cuban angle massively detracting from what was overall a stunning musical performance. The set was crammed with enough stunning guitar work and “Fuck me!” plucking to remind everyone just why Rodrigo y Gabriela remain one of the most fascinating live acts around. For one night a corner of South London became Havana and you could almost taste the cigar smoke and mojitos in the air on the walk back to the tube.