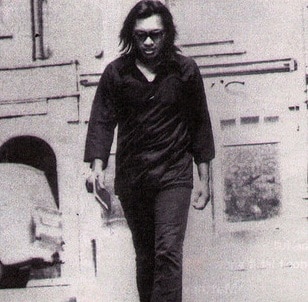 You can forget your Crossfire Hurricanes and your Led Zeppelin reunions; this year’s hottest cinema ticket for the discerning music lover has been the excellent Searching For Sugarman. Its subject, Sixto Rodriguez, whom many believed to be dead, was plucked from obscurity in his late 50s thanks to the hard work of some obsessive South African crate diggers. The film is the heartwarming and fascinating story of a man who believed his music career was over and who was blissfully unaware that on the other side of the world he was bigger than Elvis Presley.

Naturally the film’s success has enjoyed enough interest to warrant a tour on these shores that sees Rodriguez, now in his 70s, doing exactly what he should have been in the 1970s had his two albums set the world alight. He is both a Cinderella sensation and a reluctant pop star, and even now it’s clear from his on-stage manner that he still can’t believe his late success. The wilderness years happily spent working as a labourer in Detroit sadly appears to have taken a physical toll on Rodriguez. He needed help to and from the stage and aid with the odd technical difficulty, but all these signs of age dispersed the second he took to the mic with his guitar.

His musical performance was both animated and cool. Dressed entirely in black with leather jeans, he looked every inch the hippy folkster. In septuagenarian rock circles you’re either going to get a highly polished performance like The Rolling Stones or a borderline belligerent one like Bob Dylan. Rodriguez’s years out of the music scene still cast him a comparatively inexperienced performer and this brought a few rough edges to the performance, namely in the time spent between songs that threatened to drag down the pace. However, you can forgive Rodriguez for his genuine humility and belief that a musical career is not the be all and end all to life.

The audience was split 50/50 between loyal South African fans and recent converts who wanted a slice of the action, and we were all treated to a selection of well-loved songs, the odd anecdote, some jokes and a minor stage invasion. The music was definitely the star of the show with the audience clearly revelling in the likes of Sugarman and an encore of Dylan’s Like A Rolling Stone. There’s something about Rodriguez’s songs and warm voice that brings out an instant smile and feel-good factor. Surrounded by a backing band made up of members of Phantom Limb, he was clearly in his element and proved to the audience that he could still rock. However, it was the final song that saw Rodriguez take the spotlight on his own that really sent shivers down the spine.

An old urban myth about Rodriguez stated that he died after setting himself on fire during a particularly difficult gig. Watching him perform it’s difficult to envision any Rodriguez gig going badly, let alone to the point of self-immolation. As it happens there were standing ovations aplenty, a lot of love from the crowd and the only naked flames near the Royal Festival Hall would be those of the smokers congregating outside at the end of the set.