by Michael Hubbard
published: 18 May 2015 in Live Music Reviews
Tweet 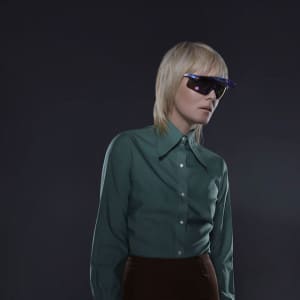 Róisín Murphy’s latest album Hairless Toys was a long time in the making. In the seven years since her last long-player, the electropop-laden Overpowered, the sometime Moloko star has parted company with her former major label, had two children, collaborated with a slew of dance music producers – amongst them Fatboy Slim, David Morales and Crookers – and, last year, she released Mi Senti, a covers EP of songs in Italian. As you do.

Her sound – detached, chic, statuesquely dressed dance music for grown-ups coming down – has evolved in that time; the new work, though still recognizably hers, is a dense, complex, post-club affair of soft vocals over calming, soothing textures, much of which fuzzes hazily together, creating the effect of a well cushioned aural cocoon. The songs begin in calm fashion, whispery and not a little woozy. When dramatic stabs of synth or lively beats kick off, they’re rarely sustained for long. How would these new tracks sit in a live set covering the rest of her career?

At the Roundhouse, loyal and patient fans were to discover that they made some sort of sense together, albeit a skewed, peculiarly Róisín Murphy sort, and that visuals still matter as much as sounds in tying it all into a cohesive whole. Her costumes are if anything more outlandish than ever and change frequently, and the screen behind her is a riot of colour throughout. As far as her performance goes, there’s a curious sub-narrative of sorts, one in which Murphy directs ire at music journalists by means of a series of quotes, which proves to be rather at odds with the nature of the music, given it’s been a while since music journalists have written about her.

Curiously there is scant reference tonight to Overpowered. Movie Star, the title track and Cry Baby are nowhere to be found in this set; Dear Miami shows up as the sole representative. It’s as if she’s moved on from that period where she looked and sounded most like a pop star. Instead we have music that is less straightforward, perhaps not as immediately accessible, but just as special. Jealousy builds, builds and builds before deliciously and repeatedly crashing, channeling emotions superbly. Hairless Toys single Exploitation is a set highlight, even if Murphy departs the stage during it, leaving the audience in her band’s capable hands with Nile Rodgers-inspired disco guitar holding it all together.

House Of Glass, on record a highlight, proves to be so live too, the album in microcosm, and Simulation – a stand-alone track from an EP of the same title – is a treat of philosophy and melody. She finds time to slot in In Sintesi, from her Italian EP. Moloko tracks also crop up; Pure Pleasure Seeker and Dirty Monkey make the main set, and the duo’s (arguably) finest moment, Familiar Feeling, gets reworked into the encore, sounding funkier than ever. The set is topped off by the love letter/lullaby that is Unputdownable, a purr of a song that closes the evening’s entertainments with a warm, nuzzly hug.

File Murphy up there with those edge-of-pop artists – Björk, Grace Jones – who instinctively understand that a gig is a visual experience and know exactly how to rise to that particular challenge, from the writing of their music to the follow-through of production values, and who are able to preserve their individuality over years and even decades. Tonight, Murphy reminded us that she is a sight to see. Hopefully it won’t take her another seven years to follow up on the beguiling complexity that is Hairless Toys, and for us to see her again.