by Steven Johnson
published: 6 May 2014 in Live Music Reviews
Tweet 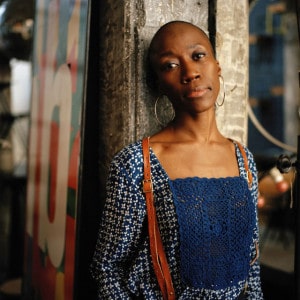 The 50th anniversary of the highly respected and eclectic American label Nonesuch is being celebrated by a month long series of shows at the Barbican in London. Attention may have been initially drawn to the concerts that showcased the label’s acclaimed releases in the worlds of classical minimalism and jazz but this opening show by Malian singer Rokia Traoré and alt-folk artist Devendra Banhart demonstrated the many-faceted nature of the label and ensured the series began in fine style.

Banhart’s opening solo set may have featured almost as much in the way of endearingly unstructured stories and impromptu audience interaction as songs (including amusing anecdotes about passing through UK border control and his first meeting with Nonesuch) but the fact that he carried the crowd unreservedly showed the esteem in which he is held.

He plays primarily from his latest (excellent) album Mala, recasting many of the songs in enjoyably loose, pared-down fashion. It is quiet and hushed from the start, notably on Golden Girls where his guitar is barely audible in marking out its skeletal line. His albums and style may have undergone various changes over recent years but it’s apparent that he remains a highly engaging and individual performer, indulging in artistic gestures throughout and even conducting his own vocals on Daniel. Those songs with Spanish lyrics seem to produce even greater levels of theatricality, his voice inverting, inflecting and quivering along the way.

The admission that “requests are encouraged” brings a flurry of responses. He reacts by playing fragments of several songs, in a style not dissimilar to Prince. Over the course of a few minutes we get snippets of Chinese Children, Sea Horse, Santa Maria De Feira and Shabop Shalom. It can be a move that causes frustration but there’s little sign of that in the crowd. Little Monkey and At The Hop get fuller, unedited treatment, and see him reach further back into his past. Carmensita and Never Seen Such Things meanwhile both have moments of comic haphazardness, including Banhart laughing at the shaky guitar line in the former. He shows he can be intimate and sincere though by throwing in a brittle cover of If You Could Love Me by Edwyn Collins. There’s a featherlight airiness to his set and after it’s over it almost feels like we’ve had a delicate (if very enjoyable) brush with a gig as opposed to a fully-fledged live experience.

Traoré is a considerably more well-rehearsed and formidable proposition. Over the last year she’s cemented her position as one of the leading African artists of her generation, and tonight she mainly draws on the musical affirmation of faith, pride and belonging that was last year’s Beautiful Africa album. She’s backed by a reliably solid band and two backing singers but it’s her own voice that still impresses most, having a toughness and muscularity to it, yet equally a sensuousness and richness.

Lalla offers the first glance of the rhythmical glide that inhabits her music, running in parallel with her deft, darting vocals. It’s also present on the elegantly evocative Ka Moun Ké before Devendra Banhart returns to the stage to add guitar to the peacefully swaying Sarama. She seems to grow stronger as the show goes on – Melancolie is in receipt of subtle percussive augmentation and Sikey motors along like a finely configured engine before the funked-up guitar riff and impassioned sentiment of the title track Beautiful Africa takes over. She dips into 2008’s Tchamantché album to play Zen, which offers arguably the most celebratory moment of her set, Traoré relinquishing her guitar, her band now in full flow.

Tuit Tuit sees her operating at peak capacity, the track’s liberating, exclamatory essence prompting mass dancing in the venue, a much more natural, suitable response to her music that the seated enthusiasm of early stages. Traoré seems to be enjoying it more than everyone else in the audience combined, losing herself in the music and in her dancing. She stops to give an eloquent speech on life and music before launching back into a reprise. It would have been a suitable time to close the show but she still has energy in reserve and songs to share and returns for a two song encore.

The pairing of two previously unconnected artists for this opening concert was an undoubted success, reflecting the nature and outlook of the label. If the quality of performance and variations in style, tone and mood seen in this opening show are anything to go by, it’s going to be quite a month ahead at the Barbican.