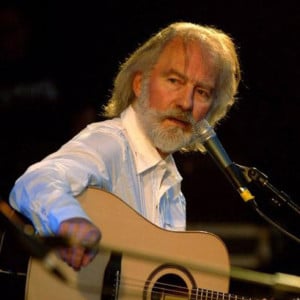 There was almost a brawl tonight between two middle-aged couples in the aisle. It would have ranked up there in the most surreal of gig moments, though it certainly isn’t what you’d expect at a Roy Harper gig.

Indeed, the crowd are rather excitable this evening at the Bridgewater Hall. This is Harper’s first hometown gig since coming out of retirement for 2010’s support slot for Joanna Newsom, with the harpist ranking Harper’s 1971 work Stormcock as her favourite album. Harper is Rusholme born, and the Bridgewater Hall is only minutes away up Oxford Road. As he comes on stage, a woman rushes to the stage to hand him a rose. He holds it aloft, proud.

New song Time Is Temporary, from new album Man & Myth, arrives early in the set, with the electro acoustic guitar achieving a quiet buzz while Harper’s delicate vocal delivers divine lyrics such as “I have seen you for days, dipping your toes into the stream, a vision of purity in an old pre-Raphaelite dream”, which carry themselves effortlessly through the hall. It achieves a somewhat lullaby-like quality, coupled with gentle strings, that leaves you almost too at ease. Meanwhile, The Stranger – a “study of betrayal” says Harper, and another track from the new album – brings the barefooted orchestra in further, in the process producing something powerful and stirring, with Harper’s finger-picking producing an almost mystical aura.

Just before January Man, a song which 72-year-old Harper introduces by saying that he’s “in the winter of life – you’re looking at January man”, someone asks him to show the audience his bus pass. With a sense of pride, he does. It proves to be a surreally poetic introduction to a song contemplating the passing of years and past relationships. Twelve Hours Of Sunset soon follows, the orchestra again providing added emotional depth and power as he sings “now the time has turned to space and there’s no-one there to check to pace”.

Me And My Woman, introduced as “kind of a love song – a battle song of ideals”, is delivered with an almost thunderous quality, with Harper and Jonathan Wilson‘s electro acoustic guitars achieving a raucous, thudding quality as they almost battle with one another for dominance. Meanwhile, Harper’s vocal sears – yes, sears – with passion and pulses through the hall. This marks a really special moment.

Once Me And My Woman is complete, an audience member shouts something at Harper. “What compelled you to tell me this?” he says, followed by polite laughter. That’s how you deal with unwanted banter. Still, whatever it was, it was no doubt borne out of love and passion for what’s just been played. When An Old Cricketer Leaves The Crease follows in the encore, a fitting closer as Harper’s vocal soars to its highest. This is a man aware of the passing of time.

“It’s been unnerving coming back to my home town,” he says. “It’s been great to make my acquaintance with you again.” He seems moved. He leaves the stage, holding aloft his rose. Will Harper return to his roots again? Let’s hope so.