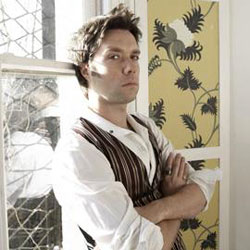 The ornate and historic surroundings of Hampton Court Palace tonight played host to Rufus Wainwright for what was billed as a ‘solo, up close and personal’ performance.

The Hampton Court Palace Festival, now in its 16th year, runs the gamut of veteran Van Morrison through to the easy listening of Katherine Jenkins. As he road tests new material, it’s something of a curiosity that Rufus is on such a bill at all, let alone playing two shows.

It had been raining heavily in London for most of the day but, slightly more alarmingly, there turned out to be something of a dearth of alcoholic beverages. We were told the catering truck, which was supposed to be on site, had broken down en route.

The evening took a decided turn for the better when Rufus took to the stage, a little after 9pm, bedecked in clothes from a variety of periods, in a nod to the way the palace had been modified over the centuries: a “Robin Hood” hat; a 1930s blazer; quite striking black-and-white striped tights, which wouldn’t have looked out of place on the set of Beetlejuice; and an Yves Saint Laurent t-shirt, out of respect for the recently departed designer. The tights, we were later informed, were part of a “legs-off” contest with his sister Martha. Stay tuned for future developments.

With regards to the set-up, it was indeed a solo performance. He alternated between being behind the piano, and taking centre stage with an acoustic guitar. Interspersed in-between were history lessons of dubious accuracy, anecdotes and song dedications. An effortlessly entertaining showman, he kept the audience entertained and effusive in their applause throughout his set, which weighed in at a little under two hours. One lady even threw a bunch of roses onto the stage, after he dedicated a song to all of the women in the audience. And on the odd occasion when he forgot the words or where there would have been an instrument solo when he is performing with a full band, he made a quick quip and guided the song to its conclusion.

His set included the staples My Phone’s On Vibrate For You, Cigarettes And Chocolate Milk (ending the main set) and finished on the spine-tingling Hallelujah, which he dedicated to Ed, a roadie who was shortly to be returning to Canada. It also featured a sketch from a musical he is working on that will incorporate works from Shakespeare. In this case, Sonnet 43: When Most I Wink, Then Do Mine Eyes Best See. This had not been performed in public before, and was played in tribute to the Bard who, we were informed, had once paid a visit to the Great Hall of the palace. We were also treated to a new song called Zebulon, which takes its name from a fantastically named high school crush of his, and the emotionally charged Rebel Prince also featured.

Thus ended a delightful, slightly surreal evening, complete with individuals carrying Fortnum & Mason hampers and sporting an impressive array of rain-deflecting headgear in the open-air courtyard. Thankfully, what occasional rain did fall considerately confined itself to being a light drizzle. Not that too many of us would have minded.