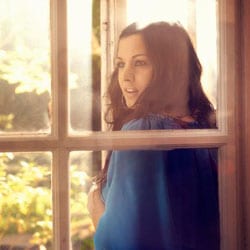 Rumer’s debut album, Seasons Of My Soul, contained a remarkably consistent set of songs, suggesting that despite binning her own name, that of Sarah Joyce, and instead borrowing that of author Rumer Godden, she had a clear vision as to the sort of recording artist she is.

With an easy-listening, loungey style that sat neatly with her Karen Carpenter voice, she wowed the Radio 2 masses and sold over half a million albums, earning herself two BRIT Award nominations in the process. But her refusal to budge from the safety of her direct influences made it a frustrating album for those who expect new music to be a little less derivative.

On stage at the Royal Festival Hall, as part of a nationwide tour of gala venues, the question was whether hearing that pure and unaffected voice in person could make up for the lack of originality.

During a lengthy set stretching to nearly 20 songs, she’s certainly likeable, and there’s no denying that her voice is beautiful. At times she seems to mimic Carpenter, at others she’s Dusty Springfield. It’s no surprise to hear that Burt Bacharach is a fan because hers is a voice that he would have taken in the mid-’60s and honoured with timeless songs.

Tonight however, the songs just don’t have the same impact as his classics, and while the likes of Slow, Blackbird and Aretha have their charms, the pace is so lethargic that without a pop injection, it doesn’t hold up on stage as one would hope. Such soporific material has a purpose, but it’s generally in the background. Here, where it’s the focus, it becomes a little boring.

Playing most of her album, she throws in a few non-album tracks, and a few cover versions, providing more value for money and justifying her place in such a lavish venue. She plays tracks by Hall And Oates, The Miracles and ends with a version of Burt Bacharach and Hal David’s Alfie, proving that she can do justice to whichever songs are thrown at her, provided they’re easy listening. It doesn’t hurt that she’s backed by a superb eight-piece band that includes a pair of backing singers and a two-piece brass section.

Rumer seems clear as to who and what she is, and there is clearly a hunger for such old-school talent. But in a world where Adele has taken a beautiful voice, borrowed from her influences and managed to connect on a staggeringly emotional level, Rumer’s songs seem cold and distant. She’s put herself into a position where she can afford to test herself with her second album. If she finds the inspiration and the courage to push her boundaries a little further into unknown and uncharted territories, and away from what amounts to imitation and flattery, she could lift her career and shoot through to far higher echelons.