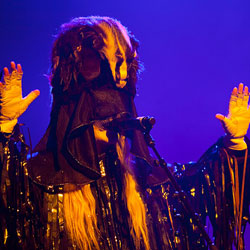 “You’ll need to listen to it some more – it’s quite relaxing,” a confused latecomer was told on arriving halfway through Fever Ray‘s debut UK gig, part of the South Bank Centre’s Ether festival.

Relaxing? Well, in a turn-all-the-lights-off-and-hide-under-the-bed-covers kind of way, maybe. Live, it feels like we’re party to something chilling, almost pagan, a strange mix of domestic claustrophobia (the stage is adorned with nine household lamps) and voodoo magic.

At 7.30pm sharp the Royal Festival Hall is plunged into complete darkness. Slowly, four band members appear from stage left, each one dressed like characters from a strange medieval fairytale. Smoke begins to billow out as lasers stretch up to the roof of the building, when out shuffles what looks like one of Maurice Sendak’s ‘wild things’. Silhouetted against a undulating red light, The Knife‘s Karin Dreijer Andersson, aka Fever Ray, may or may not be present within the giant hood, cocooned inside an outfit that looks as unearthly as the disembodied voice that rings out on opener If I Had A Heart sounds.

The cloak stays on for four songs, the flickering lamps and piercing lasers only briefly illuminating its fringes. Even when she disrobes, we still have no idea what she looks like. There’s no interaction with the crowd, no “thank you London”, no eye contact – such things would’ve been out of the question. It could all be too artful, too distant, and yet the power of the songs mixed with the sheer spectacle draws us further in. Concrete Walls is hypnotic and suffocating, whilst When I Grow Up (a relative crowd-pleaser) and (especially) Keep The Streets Empty For Me are evidence that the emotion in these songs can transcend their studied delivery.

The set ends as it began, with Andersson back inside her cocoon. As Coconut’s extended intro rebounds around the building, that voice rears up again, as alien as it is oddly touching, small lights beaming out from Andersson’s fingers. Slowly, shuffling along, she exits stage left. I can’t say it was relaxing, no, but it was wonderfully unsettling to be allowed into Fever Ray’s world, a place where dreams and nightmares seem to co-exist.

It goes without saying that Röyksopp find it hard to follow Fever Ray. Their attempts at dressing up – they’re kitted out like Dickensian gentry – feels somewhat forced and opener Röyksopp Forever (from their new album, Junior) does little to get the crowd interested. It’s not until recent single Happy Up Here that they seem to hit their stride, with Svein Berge donning a strange space helmet complete with winding tube that somehow creates that auto-tuned vocal.

With the crowd finally on their feet the duo play their first ace card, as out strolls Robyn to a rapturous reception. The Girl And The Robot is one of Junior’s highlights, a tense, paranoid pop symphony that Robyn delivers as if her heart is about to burst. On stage she prowls from left to right, sometimes with her back to the crowd, singing over her shoulder, effortless stage presence in clear abundance.

Her sheer exuberance is missed as soon as the song finishes, with regular vocalist Anneli Drecker left to fill the void. Unfortunately, Drecker’s is an irritating presence, either preening in front of the cameras or, strangely, coming out with a cape and an owl mask on. Strange because her attempts at creating intrigue are somewhat scuppered by the fact that she’s already revealed her identity two songs earlier. It all feels a bit forced, as if she got the note about it being a fancy dress show a little too late.

Röyksopp’s second ace up their sleeve sees Andersson return to the stage for Tricky, Tricky. Eager to keep up the incognito vibe, she arrives wearing what looks like a badger on her head and a dress made of tinsel. Despite everything – the bright lights, the dancing punters, the badger – she makes the line, “is six afraid of seven, cause seven eight nine” deeply terrifying.

The momentum is sustained with the early hits Eple and Poor Leno, both sounding as fresh as ever despite the former appearing on as many adverts as a Moby album track. The set ends on a definite high, but for reasons not made clear the duo decides to return for a second encore. Tenor Morning’s slow, drip-feed beat has the standing crowd slowly dropping back into their seats creating an odd, slightly disappointing end to a night otherwise rich in spectacle.