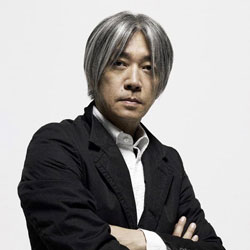 Composer and pianist Ryuichi Sakamoto is probably best known in the UK for his contributions to film soundtracks, including the music for Merry Christmas Mr Lawrence, Bernardo Bertolucci’s The Last Emperor and more recently for Tony Takitani and Alejandro Gonzlez Irritu’s multi-stranded Babel.

But he’s more of a polymath than that and his repertoire encompasses everything from chamber pieces to DJ collaborations.

These, his first solo UK dates for 15 years, see him performing unaccompanied, sans orchestra, but though the tour’s subtitle ‘playing the piano’ suggests a degree of simplicity, this is belied by what we actually get: many of his pieces see his playing blended seamlessly with sound effects, including voice samples, whale song, the ripple of water and the clanging of bells.

Sakamoto arrives on the stage and takes his seat in blackness. The lights stay low for the first piece, which involves him twanging and pinging the strings of his jet black piano, creating a dreamy sub-oceanic soundscape. Later pieces were more conventionally performed, in so much as Sakamoto was now seated at his piano instead of delving about in its belly. With his long fingers white in the spotlight and his grey hair falling across his face, he created gliding, sliding collages of sound, full of repeated phrases and dissonant stabbing of the keys.

The entire set was accompanied by a stream of graphics projected on the screen behind Sakamoto: lines diving and dropping, circles spinning and twisting and, occasionally, words. For his encore, an account of a mescaline trip scrolled along in a continuous, wired line behind him as the music pitched and soared.

As potent a show as it was, it’s a shame that the atmosphere – for those seated near the rear of the stalls – was continually pierced by the constant click-click-click of camera shutters as official photographers snapped away. It was especially grating as the show began with a multilingual reminder that photography was forbidden. It completely broke the spell of some the quieter pieces, including the evocative Energy Flow and Sigur Rs-like Still Life, and it was a real relief when the photographers finally acknowledged the several bouts of polite shushing and the one rather grumpy “shut up” aimed in their direction and replaced their lens caps. Only from this point on was it truly possible to immerse in the music.