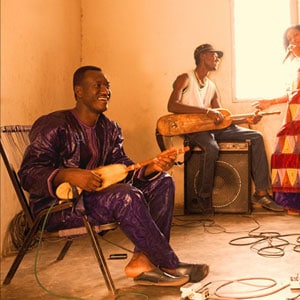 This wonderful evening at London’s Barbican not only served as a vibrant celebration of Malian music, but also highlighted the continuing volatile political crisis in Mali. Although French intervention has now seen some of the northern towns, including the city of Gao (from where one of the acts on the programme, Sidi Toure, had been exiled) being retaken from the Islamists, the conflict is far from over.

Perhaps even more importantly than this, the evening reminds us of Mali’s extraordinary cultural diversity, which has frequently been expressed through music (one of many things the Islamists have attempted to outlaw) and has seen different peoples occupy a large nation and co-operate with each other. Whilst the Tuareg people of the northern desert have occasionally voiced their frustration, the musical collaboration tonight reminds us that the Tuareg, Songhai and other people of Mali have lived side by side – a fragile but longstanding unity now being threatened by the Islamists.

With Sidi Toure, Tuareg desert rockers Tamikrest and the brilliant Bassekou Kouyaté and Ngoni Ba all on the same bill, expectations for this concert could hardly have been higher. The performance had something of the spirit of the old Stax/Volt revue shows, with Kouyaté, Toure and Tamikrest frontman Ousmane Ag Mossa initiating proceedings with a sensitive, fluid improvisation calling for peace. By the show’s joyful, electrifying, irresistible conclusion, the stage is filled to bursting point with musicians – Toure’s band, the whole of Tamikrest and Ngoni Ba and a very special guest in the form one of Mali’s greatest musicians, Rokia Traoré.

Sidi Toure’s stately, eloquent and quietly compelling songs are tonight delivered with an energy and enthusiasm not always evident from his more considered recordings, although Toure himself remains composed and largely motionless. He delivers some powerful speeches in French, the meaning not always clearly discernible to the largely Anglophone audience, although many would have recognised his humorous dissection of the various sterotyped classifications of Malian music. Of course, Toure’s music does show a strong connection with the blues, but it also has a language and formulation that is entirely Malian.

All of tonight’s music relies heavily on loping, disciplined repetition, but often the music that sits above this is wild and exciting. Tamikrest, often unfairly dismissed as poor relations of the more widely renowned Tuareg band Tinariwen, are particularly thrilling. Their music feels more like a hybrid with western tropes, and the performance has a sharp, ragged and attacking feel to it that is unusual and distinctive. The contrast between the sometimes dissonant sharpness of singer Wonou Walet Sidati and her softer, more understated counterpart Ousmane Ag Mossa is particularly satisfying.

Bassekou Kouyate has clearly become something of a star of exported Malian music, as his James Brown-style delayed entrance tonight attests. His band cook up a riveting storm for a good ten minutes before he puts in an appearance. This is hardly a problem though, given the strength and quality in the performances given by Kouyaté’s wife, singer Amy Sacko and his son Moustafa on ngoni. The band usually has four ngoni players, but Mamadou is absent tonight. Nevertheless, the band’s sound is still bright and piercing, and Kouyaté’s wah-wah enhanced Ngoni solos frequently take exhilarating flight. The title track from new album Jama Ko is fierce and engaged, but it also sounds like fantastic party music. A defiant spirit emerges here, not only in the spirit of Kouyaté’s speeches (which remind us that Mali’s situation is complex – Kouyaté denounces the coup d’etat as well as the Islamist threat), but also in the rousing, hugely positive music.