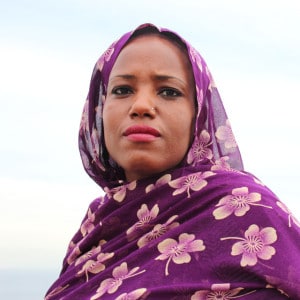 2014 is proving to be another excellent year for African music. Established names like Seun Kuti and Toumani Diabate have returned with strong albums, big band supergroups like Kasai Allstars and Sierra Leone’s Refugee Allstars have cemented their growing reputations and there’s been exciting releases from relatively new names like Imed Alibi, Noura Mint Seymali and Aziza Brahim. These last two were to feature prominently in the second Sahara Soul show at the Barbican that celebrated the music of the desert.

The on stage introduction by journalist Andy Morgan included a reference to a phrase that members of Tinariwen have espoused over the years – ‘simplicity is freedom’. It may have been primarily intended to relate to a way of life and attachment to the desert (some musicians were due to return the day after tonight’s show) but it carries over into and defines much of the music of the evening, especially during the first half that featured Malian nine piece ensemble Tartit along with members of other Touareg bands Terakaft, Tamikrest and Tinariwen.

They begin in low key fashion focusing initially on the otherworldly contours of the imzad (a one stringed instrument prominent in Touareg music) before acoustic guitars and tehardent lutes join in. The bareness and economy of sound is striking, relaying a complete immersion in their local traditions and cultural outlook. As with much Touareg music there is something exquisite about the moment where the grouped female vocal settles into a groove alongside the tinde drums.

Despite increased exposure over recent years a sense of unknowable mystery still pervades much of this music – it may no longer sound quite as distant and foreign but it still sometimes feels that to fully appreciate the the depth, textures and history of this music would require significant time spent living in the desert.

Abdallah Ag Alhousseyni from Tinariwen leads the ensemble, launching himself into an energetic form of Saharan dancing, which becomes almost shamanic when female vocals are layered on. The second half of the concert may have featured proponents of more modern Saharan music but arguably they were unable to match some of the entrancing moments in this first set.

Mauritanian musician Noura Mint Seymali opens the second half etching out dry, ground-down riffs on the ardine (a nine stringed harp). It’s a barren, harsh sound only partially offset by the warped, wiry guitar of her husband Jeiche Ould Chighaly. Tzenni, her album released earlier in the year on Glitterbeat Records showcased her astonishingly primal voice. It’s not quite as exclamatory or intense tonight but still projects a physical, corporeal presence (whilst also offering thrilling shades of Liz Fraser and early PJ Harvey, had their voices been toughened by years battling unforgiving desert sandstorms). Members of Tartit contribute trilling vocals from their seats in the stalls. Later, Aziza Brahim would make a stronger impact, arguably through having a full band backing her and more time on stage to establish herself (as well as a more accessible sound).

Nabil Othmani may currently resident in Algeria but his music is still strongly attached to Touareg traditions. There is a lightness in his voice and music when placed directly after Noura Mint Seymali but he still manages to incorporate builds in pace and intensity into each of the four songs he plays. The earthier tones of the oud also add a distinctive finish. Importantly, there is more in the way of extractable melody and this gains him a warmer reaction from the audience.

Aziza Brahim is the final act to appear on stage, backed by her Spanish four piece band (she originates from the Western Sahara but lives in Barcelona, a combination that she successfully imbues into her second album Soutak, from which her set is exclusively drawn from tonight). Gdeim Izik may be a protest song but it glides into the Barbican hall tonight, breezy and melodic. Her voice is as clear-toned and mellifluent as on record and, like the others who appeared before her, musically there is no danger of over-complication. There’s a modesty and elegance to her singing, all delivered from behind her position at the front of the stage playing the tabal drum. During set highlight Soutak she can’t resist breaking out into dance, but soon self-consciously covers her face, as if she’s just realised the flow of the music has suddenly taken her outside her normal personal sphere. The evening comes to a close with Noura reappearing alongside Aziza to for a sparse performance of Julud.

That over 25 musicians filled the stage over the course of the evening paid testament to the ambition and scale of the event. It didn’t cause any major disruption but it was almost to be expected that a small feeling of fragmentation was to creep in on occasion. Over three hours of music may have tested the resolve of some of the audience, but it undoubtedly also revealed the strong health of the music of a region that is able to move forward striking a balance between tradition and modernity.