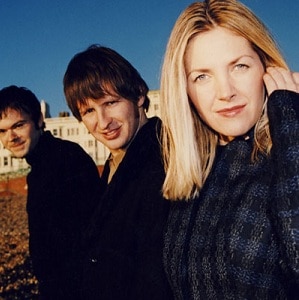 It’s a long time since the early 1990s. For the past 22 years, Saint Etienne have been marrying electronic dance music and icy, wistful vocals. Hailed at their peak as purveyors of ‘pure pop’, they represented the pinnacle of the high sheen electronic pop that was to be swept away by grunge and britpop. Bypassing the depressing trend for reunions by never having actually split up, Saint Etienne have evolved without forgetting their roots, cultivating a near-cult following in the process. Their longevity has created a muscular professionalism to their live show, uniting shimmering songs with a knowing nostalgia.

In a remarkably full Shepherd’s Bush Empire, Sarah Cracknell, Bob Stanley and Pete Wiggs are greeted by a warmth and exuberance unexpected from such a large collection of sensibly dressed middle aged men. Glamorous and enigmatic, Cracknell captivates the audience, still proving the kernel of intrigue which holds this band together. Her voice sits perfectly within the electronica produced by the band, having a crystalline quality that is more evocative and mysterious than it used to sound on record. Songs such as DJ and Tonight, from recent album Words And Music, see Cracknell’s finest vocals – introspective and longing, they are well received and prove the band’s continued musical importance.

However, the set is weighted heavily towards their older material. Old favourites such as Sylvie and Nothing Can Stop Us are greeted with an adoration which belies, or perhaps befits, their age. Considering that many of these songs laid the template for many subsequent artists, you could forgive Saint Etienne for being slightly resentful as to why they never quite achieved the enduring status and respect enjoyed by some of their contemporaries. As the evening progresses, their limitations emerge. They never quite explored the darker emotional extremities of Portishead, don’t possess the musical ability of Cocteau Twins and don’t ever push the juxtaposition of electronic beats and melancholy lyrics to achieve anything close to some of Robyn’s recent output. Saint Etienne have a lightness of touch and pop sensibility which both restricts them and gives them their charm. He’s On The Phone, which produces a mass singalong when they play it in their encore, is a perfect example of the compellingly superficial music they specialise in. It’s enjoyable, but leaves you wanting something more.

Attracting new fans with their latest album seems unlikely, but the old faithful are delighted by tonight’s show. And the new material is interesting enough to suggest that the best could be yet to come for the band. The energy and enjoyment which emanates from the band is infectious and it is thoroughly appealing to witness a band in their third decade refusing to rely on old hits. On recent single Tonight, Cracknell sings: “There’s a part of me only they can see.” It’s an exciting threat – here’s hoping the band have future pop classics waiting to be revealed.