by Michael Hubbard
published: 3 May 2007 in Live Music Reviews
Tweet 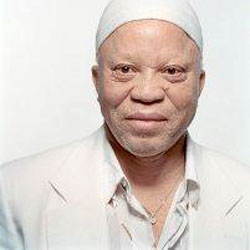 There’s little that can prepare you for just how spectacularly funky Salif Keita’s live show is.

Too often when the nebulous term “world music” is applied to a musician’s work, critical response verges on the academic, adopting a notably different tone from that used to describe contemporary pop and rock acts.

Yet as the Roundhouse was tonight to witness, Keita is well able to make a house move and an audience grin. This was to be no worthy exercise in cultural understanding. Keita came here tonight to party.

Dressed in white linen, the 58-year-old multiple Grammy nominee joined his 10-piece line-up to a rapturous welcome. Willowy ladies in print dresses sashayed stage right, a back line of stunning percussion and drums set an addictive pace from the start while kora, guitars and bass filled the rest of the sonic spectrum. Dominating it all was Keita’s powerful, tuneful belter of a voice. It was not for technique but for its passion that it was so mesmerising.

What followed this charismatic entrance was to be a set of two distinct halves. The first six tracks,beginning with Deri and Laban, were all plucked from 2005’s M’bemba (ancestor) album, while the latter would comprise tracks selected from various older records. In between, with the audience in respectful and silent thrall, Keita finger-picked an acoustic guitar and intoned intimacy as he demonstrated his voice is as well suited to quieter numbers as it is to the loud, funky stuff. He does both with palpable passion.

Always comfortable with fusing musical styles to create his own unique sound, Keita’s last two albums have seen a return to his Islamic griot (storyteller) roots. 2002’s Moffou and M’bemba, his most recent record, were both recorded in Mali’s capital Bamako, after Keita returned from flirting with synthesisers, jazz and even Santana while recording in Paris. Abandoned dancing from a dervish-type character variously attired in desert robes, native warrior beads and elaborate witch-doctor mask, coupled with frenetic percussive ad-lib jamming, made the live experience of these songs something else again over the recordings.

Quite unlike the music of his compatriot the late Ali Farka Tour, whose desert blues occupies a much quieter, reflective space, Keita’s music is closer to that of Mory Kant, a fellow Mande traveller in the griot tradition who’s also flirted with western instrumentation (most memorably on Yeke Yeke, a song evoked more than once here tonight).

Keita’s giant reputation allowed him the humble opportunity to allow the band to showcase their own talents, and it was an opportunity he frequently took up. Happy to cede the stage to the other musicians, he’d brandish a mat as white as his clothes and kneel down while his band demonstrated their mastery of their instruments. On M’bemba, Toumani Diabat plays kora, but the player tonight was no less a virtuoso. Sliding along the stage floor on his back while intricately picking his way through a rhythmic melody one minute, the next he’d be wielding the huge instrument behind his back as though playing it any which way was a talent he was born with.

Closing the set with Madan, from Moffou, Keita left the stage to his band, and did not return. There would be no encore – in a set of nearly two hours he had given his all, said what he had to say, and his audience had lapped up every minute of what was a rare and brilliant show.