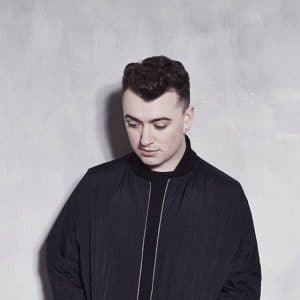 The Shepherd’s Bush Empire always seems so small and intimate that it’s surprising how many people actually fit in to it, something you only really see when the doors that are supposed to open at 7pm are still resolutely shut at half past so the crowd is spilling down the street, blocking the doors to the neighbouring pubs and getting soaked with rain.

Not that this dampens any spirits: once the doors finally open and the crowd streams inside, the atmosphere is positively carnivalesque, celebratory still, perhaps, from Sam Smith’s Critics’ Choice win at the BRIT Awards, and buoyed up further by the knowledge Money On My Mind, his debut solo single, has just gone straight in at Number 1.

But this palpable excitement for the headliner makes the task for the support acts a challenging one. Daniel James kicks off confidently enough, standing alone in the middle of the stage with just an acoustic guitar, an effects pedal and a clutch of emotive, vocal-led songs. Despite some strong background chattering, he is a commanding stage presence and wins much of the preoccupied crowd over, especially with last song and debut single, A Lonely Man, with its strident, sea shanty-esque refrain.

After this sparse yet powerful performance, Josh Record seems decadent with a three-piece. The harmonies are lush, all falsetto swooping through reverb, but it’s slow and full of All For Love and ‘Find a Way’ clichés and a bit One Republic-y. His last song, Alaska, sees them bow out with an enthusiastic send-off, but half the noise is still preoccupied nattering from the edges.

The excitement now begins to edge towards the febrile, meaning every lampy with a cable is received with ear-piercing screams as they saunter onstage. And it’s very loud, because there seem to be an awful lot of lampies, scurrying about doing who knows what.

And finally, he’s here, man of the hour, name emblazoned on the wall behind him in lights – so that’s what they were doing. That and assembling a stage for the string quartet and erecting an incomprehensible plastic cage around the drum kit.

On strides Sam Smith in a black shiny raincoat, rocking that widow’s peak, looking like a sort of young vampire Columbo, and however many people fit into the Shepherd’s Bush Empire SCREAM THEIR HEADS OFF as he launches into Nirvana.

As well as the strings, drums, guitar and bass, Sam has a three-piece backing group, giving the whole thing a lush, layered Motown vibe, interspersed at the end of every vocal line by a punctuation mark of hysteric boyband screaming.

There are tiny touches of Rufus Wainwright’s theatricality, especially on more plaintive numbers such as I’ve Told You Now and Not In That Way. But in other moments, such as on Restart, flanked by his trilby-toting guitarist, he morphs into a Luther Vandross-channelling disco ball, demanding even the upper levels get up on their feet, dancing around the tiny bit of stage left to him amidst his massive entourage.

The biggest screams of all are reserved for the Big Tunes: Latch, the Disclosure collaboration from 2012, two-step Naughty Boy project La La La, and Money On My Mind, the current Number 1. These are the dancier, most contemporary sounding songs of the evening, but they also seem to be the songs on which Sam’s phenomenal voice has the least to do, and as a consequence seem the most conventional and easily forgettable.

The only song of the entire set where he breaks into a proper swagger is on a rumbling, grimy and thoroughly pleasing cover version of the Arctic Monkeys’ Do I Wanna Know? – proving that there is sleaze rock ‘n’ roll potential underneath the pop soul stylings.

Such is the lateness of the hour that the applause hasn’t even dipped before he’s back on for his encore, to introduce us to next single, Stay With Me. It’s nice enough, a slice of perfectly acceptable gospel pop, sending his adoring crowd into paroxysms of adoration – but as the crowd disperses back out into the rain, it’s an Arctic Monkeys song playing in my head.