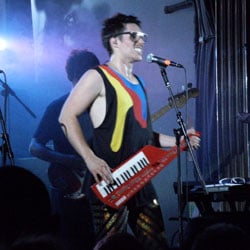 Australia-via-LA pop picker Sam Sparro has just toured with labelmate Robyn. She next tours with Madonna in Europe, while he next plays his first headline spots across Blighty.

Tonight would be an indication of whether his graduation is too soon. Sparro’s chart-munching anthem Black And Gold – and a penchant for intriguing designer costumes – propelled him onto playlists and into festivals. But is he a one hit wonder, a one trick pony, a one song guy?

Since we saw him at Brighton’s Great Escape festival last month, Sparro has found himself a triptych of black-clad backing divas sporting gold necklaces, and a red keytar to flounce about with. He’s reworked several of his debut album’s songs to feature even more individualistic vocal touches. All this has served to ramp up his set’s theatricality. Previously reliant solely on his note-perfect voice, the Sam Sparro live experience now has rather more going for it than even a couple of months ago.

As befits divas everywhere, Sparro indulges in a costume change half way through, but he sparks off his backing vocalists too. They fan each other with matching towels and each gets her spot in the limelight in what could best be described as a diva-off while he flounces off to change into something even more improbable.

It’s all great fun, and that’s what Sparro seems unashamedly to be about. During Black And Gold he leaps off the stage and touches the willing hands of his public, several of whom come running back to their friends beaming. And with his sequinned top and reflective, bumcheek-hugging trousers he sparkles like a robotic mirrorball as he struts, bodypops, poses and squeals, Prince-like, between lyrics.

In amongst the gems there is filler, as with the album. But despite the set being largely the same as he’s been playing since his London debut at the Camden Crawl in April, the songs have markedly grown on the road. Sparro seems well able to note what works and what doesn’t, and the material is elastic enough to allow for modifications as he sees fit. 21st Century Life, accordingly, is greeted with almost as much enthusiasm as his first hit now.

The set had been preluded with a DJ set of late ’80s electropop, the likes of The Shamen‘s Ebeneezer Goode reminding the fair-to-middling crowd of their youth. Or in some cases, of their days in nappies. It seemed appropriate then that it closed with a cover medley comprised of Black Box‘s Ride On Time and Crystal Waters‘ Gypsy Woman, both showing off the four considerable vocal talents on stage. It’s high time somebody covered Ride On Time, a fabulously over-the-top class act from 1989, and Sparro, in thrall to acid house and all things electro, is the ideal artist for it.

He’s only been at this music career malarkey for a few months, but you have to wonder when the call from Madge will come for Sparro to join her on the road too.