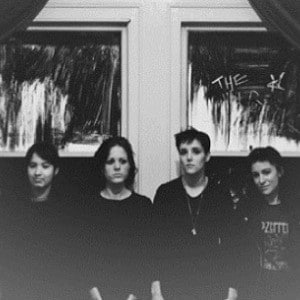 Hearsay and speculation is all that most UK music fans have heard regarding Savages and Palma Violets. Two bands with a firm footing at the summit of Mt. Hype, little has been divulged except rumours regarding the enthusiasm of Geoff Travis, the level of devotion from their über-hip fans and the sheer youth, vigour and talent of both groups.

It is an astute move then to embark on a joint tour; a chance for two bands to simultaneously promote themselves and crossover to the other’s fanbase. With precious little available in terms of releases (they’ve recorded just the one single between them), obtaining tickets to see two groups that have caused such a commotion in the capital feels practically compulsory tonight.

As such, the excitement and curiosity was palpable at Oxford’s Jericho Tavern; an establishment that often hosts new bands, this event seemed to be a little different; the crowd were expectant and curious, waiting to hear the cacophony that was soon to be released by openers Palma Violets. They were not disappointed. Gracing the stage with a refreshing, ballsy and occasionally irksome cockiness, the young band raced their way through a set of shouty garage punk reminiscent more of the likes of The 13th Floor Elevators and Thee Oh Sees than the previous comparisons with The Doors and The Velvet Underground.

They played with unbridled enthusiasm; taking advantage of a mid-point power cut to dance around to a drum solo and energetically bashing into each another throughout. Recently surfaced track Tom The Drum was typical of the set; lo-fi, raw and lively but nonetheless taut and professional, helped by the organist who proved to be the anchor of the band – a comparatively serene foil to the joint frontmen and maniacally proficient drummer. Their unhinged antics were at once melodramatic, chaotic and endearing, also revealing a knowing, art-school self-importance that recalled very early Blur.

Menacing post-punk came next from the excellent Savages. Eerie, tight and foreboding, their sound is by no means new; comparisons to Joy Division, Siouxsie And The Banshees and Wire may be obvious, but Savages shrug off any accusations of plagiarism via a combination of excellent songcraft, style and musicianship. Frontwoman Jehnny Beth ducked and weaved on stage with real urgency; each beat commanding and ushering her body forward as the bassline thumped, the guitar stabbed and the drums pounded.

Each song walked a tightrope between pop sensibility and experimental noise; the lead guitar a swirling My Bloody Valentine-esque wall of sound in places and a jagged, sparse compliment to the solid rhythm section in others. Ending with a much requested performance of single Husbands, they finished with the intensity with which they started; Beth’s Ian Curtis style dancing, androgyny and intense demeanour still enrapturing the audience.

The music showcased tonight may be derivative but was played with such energy and excitement that it is hard to know whether Savages and Palma Violets are a look to music’s future or an incarnation of its past. What is evident is that the hype is by no means unfounded.