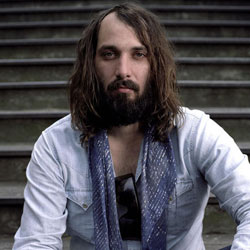 With hair tied in a bun and her tiny frame enveloped in flowing black, Lykke Li looked older than her 22 years as she attracted a sizeable crowd for her supporting set. Dance Dance Dance gets her going. She bangs a tambourine with a drumstick. Her vocals are rather lost amid a sound mix that’s bass heavy compared with her recordings. She and her drummer have two kits between them, with keyboard and guitar for back-up. Later she rustles some bells and attempts kazoo.

The breathily poppy So Happy is next up and, as with her opener, she confounds her audience with odd pauses and unexpected endings, causing applause to break out mid-song and a lack of applause at its end. Where she has multi tracked vocals to work in, she occasionally takes the backing part in preference to the lead, which instead she summons from a pre-recorded track.

Little Bit’s ditsy, breathy arrangement on record is cranked up in this live setting, while quieter numbers Complaint Department and Window Blues are left out of the half-hour set entirely. I’m Good, I’m Gone proves a highlight, a confident piano-led number that sees her finally speak to her audience: “You are allowed to dance, you know,” she announces.

Prince once declared himself so sexy that he could fuck himself. If Sébastien Tellier had dropped that one it would have joined the one liners, declarations and witticisms which peppered this evening at the Scala.

In blue-violet light Tellier waddled his way onstage, pinstripe shirt, white scarf, white trousers with shaggy hair curtaining those thick Prada shades. Striking the pose of a guitar god, with a pink bass guitar for good measure, he proceeded to croon and whisper the R&B opening to his new album Sexuality, Roche. As entrances go, there aren’t many more extravagant.

So followed France’s official Eurovision entry, the very un-French power pop number Divine. Nuls points? Surely not, though it will be one of the more uninhibited performances Europe gets to see for all the Tellier virgins out there.

He had much to say as well, usually opting to take off the Pradas before entering into his banter topics of choice whilst swigging a bottle of whiskey: obesity, family, Jean-Marie Le Pen, the English, the Swiss, prostitutes, Asian rent boys.

The Pradas are back on and he is pole dancing his mic in a fluid downwards motion, gesticulating like a fashion photographer, or behind a piano delivering transfixing renditions of La Ritournelle and L’Amour Et La Violence.

At the evening’s equinox, Sexual Sportswear engulfed the venue so intensely it made Jean Michel Jarre look average. Moments later Tellier was sprawled across the piano, chest down, arms folded singing into his mic, legs crossed behind his back and kicking them forwards. Returning centre stage to tousle his hair and grunt into his mic, he unbuttoned his shirt, unzipped his fly and mistakenly dropped his scarf. As performances go, it brought Sexuality from record to life, and one of music’s original sons back into the spotlight.