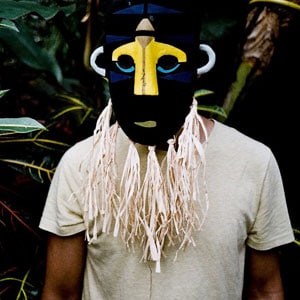 Upon its release last June, SBTRKT’s excellent self-titled album drew enthusiastic responses from indie-skewing blogs, websites and magazines. Now the music of SBTRKT is finally beginning to get attention from the people who can turn the faint murmurs of critical approbation into the loud ringing of cash registers: the nation’s radio programmers. In keeping with SBTRKT’s improved mainstream profile, tonight’s sold-out gig at KOKO is being recorded for Radio 1.

The SBTRKT live experience falls somewhere between the rigidity of a rock gig and the more freewheeling nature of a DJ set. The tracks that make up SBTRKT’s small back catalogue are elongated attractively by way of extended outros and improvisations that fall on the acceptable side of self-indulgence.

The show opens with the instrumental Heatwave, during which a curtain divides the audience from the stage. After a few minutes the curtain falls, and what lies behind is somewhat underwhelming sight: two blokes – Aaron Jerome, the brains behind SBTRKT, and regular vocalist Sampha – hunched over keyboards and other bits of gadgetry, both wearing the ceremonial masks that are the focal point of SBTRKT’s artwork.

If the visuals are a tad underwhelming, the music certainly isn’t. SBTRKT have been lumped in with the dubstep movement but – the odd subsonic bass surge aside – their music is really a continuation of the proud British tradition of genre-spanning soul music exemplified by Massive Attack and, before that, Soul II Soul.

The crowd is much broader than the blog-fuelled nature of SBTRKT’s success would tend to suggest: twentysomethings who take their fashion cues from the cast members of The Only Way Is Essex rub shoulders with the bespectacled, willowy lot who typically attend gigs at KOKO.

On stage, there’s no sign of the skittishness promised by Jerome’s mask-wearing and pleas for anonymity in the press. He chats geezerishly with the audience and flits energetically between his samplers, keyboards and a drum kit (the latter feeling like a tokenistic concession to ‘live’ performance that don’t really add much soncially). Sampha shows himself to be a handy right-hand man, combining singing with percussion and knob-twiddling, while splendidly-named vocalist Roses Gabor joins them for Pharoahs, which – with its melodic similarities to Janet Jackson’s When I Think Of You – is comfortably SBTRKT’s poppiest number.

The crowd goes nuts early on, so it’s a shame that this show is configured like a rock gig, with the audience facing the stage. No matter: if SBTRKT’s star continues to rise, then gigs at mid-sized, rock-leaning venues like Koko will soon become a thing of the past.