by David Meller
published: 6 May 2014 in Live Music Reviews
Tweet 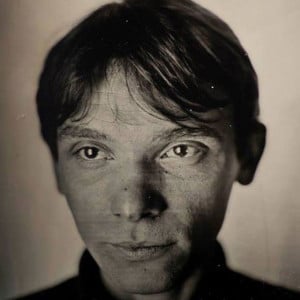 On closer inspection, it’s the younger Brewis brother, David, with his band. They’re setting up. Tonight is about School Of Language, although Field Music is never far away in mind and body. Older brother Peter is here as well – he’s on drums – although he’s opted against the industrial wear. Unfortunately, all the caps have apparently been sold. Presumably they’re the summer’s must-have accessory. One of the negatives of tonight being the final date on this tour.

Oldham’s Kiran Leonard begins the evening, his prodigious air showcased from the off: there’s something of the Steven Malkmus about him, with touches of Camper Van Beethoven when one of his bandmates brings in added touches of violin. Wild Walks certainly has something of the Slanted And Enchanted about it; Leonard stands adjacent to his microphone and thrashes every bit of his guitar’s fretboard as he coerces all sorts from it. Incredibly refreshing – and to think he’s only 17 or so. So much Malkmusesque self-confidence, verging on nonchalance. He has every right to be, mind. Bright things ahead.

Barbarossa – aka James Mathé – is a funny one. Despite sharing the Brewis brothers’ label Memphis Industries, he’s a rather odd choice for this evening and the tour in general, especially when following the energetic and dynamic Leonard and preceding this arm of Field Music Productions. Despite having some positive and touching moments, such as playing title track Bloodlines from his recent album, it all feels a little too bloated and ill-suited as he plays his blend of introspective and minimalist low-tempo electro. The crowd don’t seem entirely certain how to greet it, either.

School Of Language change from their boiler suits and caps to look rather suave in comparison: David has the look of an early-to-mid ’80s pop-star with his blazer and slicked back hair. Rather resembles Magazine-era Howard Devoto actually. He begins with recent single Dress Up from the recently released Old Fears, with it sounding every bit as precise as on record (a Field Music trait indeed), albeit with added ballast: Peter’s drums especially so, with David “Jaff” Craig of Futureheads fame’s synth piercing through.

“It always feels like a risk playing a ballad,” says D Brewis. “Aye, especially third,” replies P Brewis from the back. The brotherly spark and humour present as ever. Album title track Old Fears is superb; if anything, the minimalist nature of the track comes through more live, the beat boxing, David’s rather cool vocal and small touches of guitar allowing it to breathe and awash the room.

“Just because I’m taking my guitar off doesn’t mean it’s a ballad,” says David, much to everyone’s amusement. Indeed, soon follows Rockist from 2007’s School From Shore, in turn receiving many a cheer. Indeed, at this point you realise that when solo, David can easily command the stage and come to the forefront. It’s rather surprising when you see it, really. Presumably that’s some of the logic behind the Field Music sabbaticals. Let one have some time on their own; we could do with Peter resurrecting The Week That Was.

Distance Between demonstrates the difference between Field Music and School Of Language; here, we have something deeply reflective (“Don’t make me explain, I can only lead you on. Don’t make me choose to turn away… I feel the distance growing more and more and more…”) and serious, with David again left to explore and command the stage sans guitar, clutching a mic. Small Words is more Field Music in scope, carrying with it the complexity and all those twists in tempo and rhythm one associates with them, coupled with the weaving and slanted guitar that, at times, seems to morph unexpectedly. You can never really fault the musicianship when it comes to a Field Music Production.

There will be no encore: David bemoans them as fake anyway. Still, the intricate and again minimal-sounding So Much Time closes the evening, the soft use of synth keys against Peter’s exacting yet sparse drums allowing the focus to remain firmly on the younger Brewis – something which you can’t help. Yes, it seems that underneath the boiler suit, cap and the partnership with his older brother, David has revealed himself as a crisp, confident and, like the blazer and hair, slick performer in his own right. As mentioned, it shouldn’t be as surprising as it is. Obviously a very pleasant surprise, though.

School Of Language MP3s or CDs

School Of Language on Spotify